Baroness at Chaos in Tejas in 2011 (more by Tim Griffin) 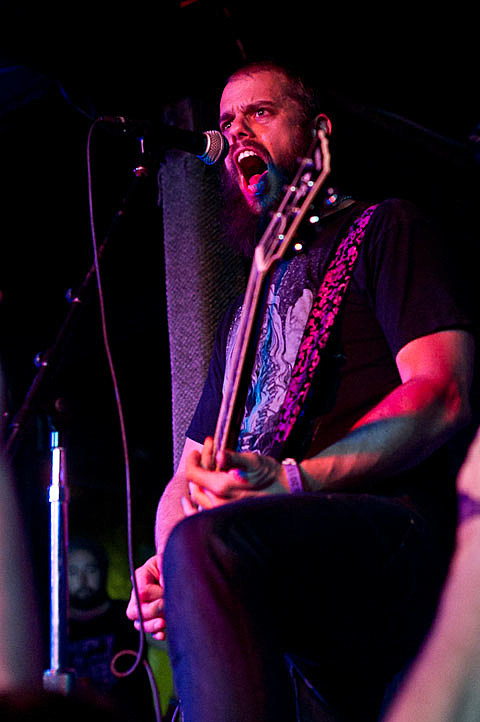 Melvins, Baroness, Honky @ House of Vans
The free shows at House of Vans continue tonight with sets from sludge veterans Melvins and the just as great, but more contemporary torchbearers, Baroness (for whom this will be their first NYC show following last year's bus accident). This one should get pretty crazy. RSVP closed a while ago, but even if you did RSVP, remember that it's first come, first served. Doors are at 7 PM.

Maxwell's Block Party w/ The Bongos, The Individuals, "a" @ Maxwell's (FREE)
And so it ends: After 35 years, Hoboken rock club Maxwell's will shut its doors after tonight. Before that happens, though, a block party (starting at 4 PM) and, later, performances from three bands from the early days of the club. Free.

M. Ward, The Kami Lyle Trio with Joey Spampinato & Tad Price @ Union Pool
Forget about She & Him. M Ward is an amazing songwriter on his own with ripping guitar skills to boot, and in the tiny Union Pool those skills will be on full display. It's a rare intimate appearance for such an amazing talent.

Summerscreen w/ Hector's Pets, The Numerators, Juniper Rising @ McCarren Park (FREE)
Tonight's Summerscreen film is '80s kids adventure classic The Goonies. Which of the three bands playing before the movie will bite the apple and cover Cyndi Lauper's theme song? Bands at 6 PM with the movie starting around sunset. Free.

Jherek Bischoff, Jen Goma (of People Get Ready), Greg Saunier (of Deerhoof), Contemporaneous @ Le Poisson Rouge
Amanda Palmer/Parenthetical Girls collaborator Jherek Bischoff, who just performed with the Kronos Quartet during Lincoln Center Out of Doors, is playing his own show at Le Poisson Rouge tonight. He's be joined by some nice support too, including members of People Get Ready and Deerhoof.

Beyonce @ Izod Center
Beyonce has four Barclays Center shows coming up (three next week, one in December), but before that she'll be in NJ tonight for a show at Izod Center. In addition to the hits, it's looking pretty fair to expect some new songs too. A totally elaborate stage show seems possible too.

For more laughs, check out the NYC Comedy calendar.

Mike Doughty @ City Winery
The former Soul Coughing singer has two shows at City Winery tonight: the early show features songs from Skittish, Rockity Roll, Haughty Melodic, and The Flip Is Another Honey; the late show features songs from Golden Delicious, Sad Man Happy Man, and Yes And Also Yes. (Did you know he had so many solo records?) Both will also feature a few Soul Coughing Numbers, too.

Dead Stars, The Hairs, The Teen Age, Honduras @ Glasslands
Here's a quality bill of indie rock, with '90s-leaning Dead Stars, the adenoidal angst of The Hairs, and The Teen Age whose music is much better than their name. Honduras play too.

Lost Tribe, Anasazi @ Home Sweet Home
It's punk night at the predominantly goth party Nothing Changes, where Lost Tribe will team with Anasazi for night at the fog-engulfed venue. The pair of bands together promises to be worth a wiped out Thursday.

Slick Rick (w/ Lifted) @ Stage 48
Born in London but raised in The Bronx, Slick Rick's flow is as distinctive as his signature eyepatch, and old-school classics like "La Di Da Di" and "Children's Story" still get the party going.

David Neff, Run-On Sunshine, Jenn Kelly, Preston Spurlock @ Cake Shop
If you like your pop twee and nasally (and some do), head to Cake Shop tonight for two likeminded artists from Arizona: David Neff and Run-On Sunshine.

Yes @ NYCB Theatre at Westbury
Sure its a bit of the bummer that they can't get the old band together, but the early Yes material, the focus of this tour, will be divine.