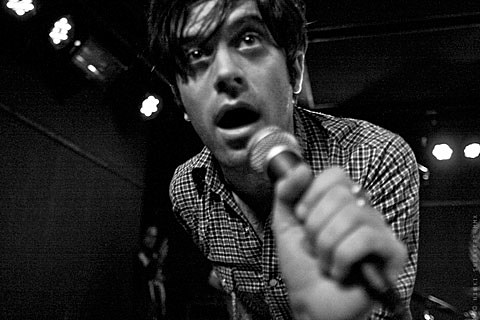 LODRO @ Knitting Factory in May (more by Amanda Hatfield) 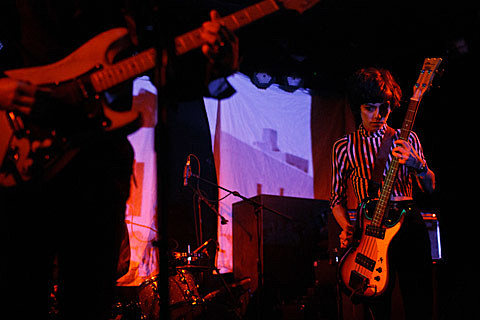 NYPL's Rodgers and Hammerstein Archives of Recorded Sound Record Sale
The New York Public Library need to make some room and is clearing out some 22,000 vinyl duplicates in its collection. With LPs in every genre and era imaginable, most of the records are going for a buck. Here's a line that's probably worth waiting in. Noon - 5:45 PM.

LODRO, Life Size Maps, Haybaby, Hippy, The Gradients @ 285 Kent Avenue
Local zine 1.21 Gigawatts is throwing this night of quality locals, headlined by the dark and stormy LODRO. Openers The Gradients make crunchy, '90s-style indie and are worth showing up early for.

Noun (Marissa Patemoster), Modern Hut, Shellshag, Worriers, Mal Blum @ Death By Audio
Tonight Death by Audio hosts a great, stripped down bill with three Don Giovanni bands -- Noun, the solo project of Screaming Females' Marissa Paternoster, Modern Hut, the project of label co-founder Joe Steinhardt, and Shellshag, who will be unplugging and playing acoustic for this one -- along with Worriers (Lauren Measure's current project) and NYC singer/songwriter Mal Blum. $7 at the door gets you in.

People Get Ready, Fred Thomas, The Kickstand Band @ Knitting Factory
While PGR have gotten the most attention for the special occasion, high-concept shows (like at Crossing Brooklyn Ferry), they do pretty good as a straight-up rock band too.

Glassjaw, Balance and Composure, World's Fair @ Music Hall of Williamsburg
One of the better 2000s post-hardcore bands to have survived into the new decade, Glassjaw, will headline a free (but "sold" out) Converse Rubber Tracks Live show at Music Hall of Williamsburg tonight. The diverse support comes from emo newcomers Balance and Composure and Queens rap crew World's Fair (which actually isn't that weird considering Glassjaw are no strangers to rap).

Wolff and Tuba, The Everymen, Overlake, Designing Women, Stephen Chopek, Law of the Sea, Ferns @ Pianos
Underrated NJ rock band The Everymen are putting the spit-n-shine on their new album, but take a break tonight tonight to play some of it live with a few hand-picked freinds.

Shaggy, TK Wonder @ Prospect Park Bandshell
Picture this: we were both buck-naked banging on the bathroom floor! OK, Shaggy isn't exactly chock-full of reggae burners, but it's a free show and if nothing else, could be fun as a social experiment.

Murphy's Law @ Rocks Off Concert Cruises
Murphy's Law on a boat? Yeah yeah, it's pretty much an annual occurrence at this point that still doesn't make this long-time hardcore band's appearance any less insane, dangerous and/or memorable (and fun).

Ken Mode, Rosetta, Tiger Flowers, East of the Wall @ Saint Vitus Bar
Canadian metallic noisecore trio KEN Mode return, this time roping in support from the great Rosetta at Saint Vitus Bar. Rosetta will be pulling from their massive new LP The Anasaesthete, so make sure you get familiar during the day today. Support is similar great with Tiger Flowers and East of the Wall set to destroy the early hours.

Nick Lowe, Kim Richey @ YMCA Boulton Center For The Performing Arts
Having been performing and writing songs for over 40 years, "The Basher" remains as charming and witty as he was when he wrote "Cruel to be Kind" and "I Love the Sound of Breaking Glass." A class act.