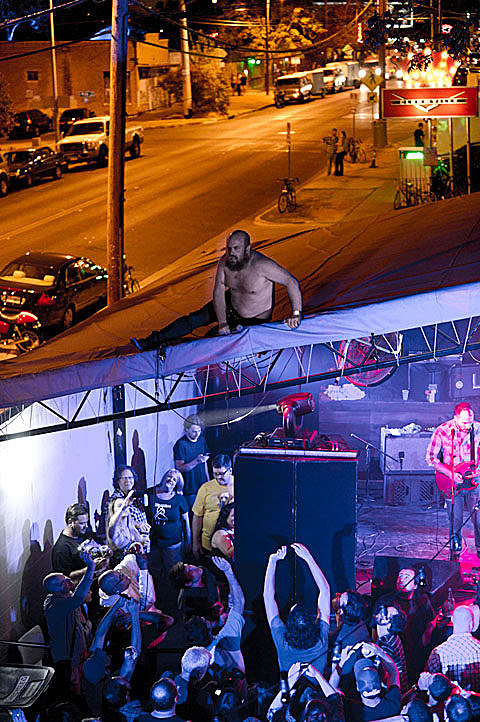 Ty Segall, VietNam, David Novick @ Music Hall of Williamsburg
Ty Segall releases a lot of records (a lot) but they're all pretty different. Sleeper finds him in acoustic mode and expect him to be in a similar mode tonight -- his performance at FYF fest last weekend had him sitting down most of the show. For the louder Ty experience, he'll be back with Fuzz later this year.

Zero Boys, Night Birds, Nuclear Santa Claust, SpEd @ Europa
Midwest punk favorites Zero Boys return to NYC to bless Europa with the great surf-punk locals Night Birds and the Ramones-y Nuclear Santa Claust in tow. Fans of early 80s/punk hardcore, make sure to make it out, Zero Boys' appearance is a rare one and not to be missed.

She Keeps Bees, Last Good Tooth, Railbird @ Glasslands
Indie folk duo She Keeps Bees are busy cooking up a new record but gave a taste via a new single last month (stream it below). Tonight's show is well-matched with Providence, RI's Last Good Tooth and the slinky sounds of Railbird

Les Savy Fav, Delorean, Small Black @ House of Vans
The line-up is a little schizo, but no one seems to care at House of Vans. Les Savy Fav's music is fun, but the band truly comes alive live thanks to wildcard frontman Tim Harrington whose onstage antics are, at this point, legendary (see above). Spanish (well, Basque if your getting technical) dance troupe Delorean should get you primed and it's been revealed that the "Special Guest" is Brooklyn chillwavers Small Black. Free, but RSVP has been closed for some time, BUT the show will also be streaming online.

DJ Clark Kent, D-Nice, Stretch Armstrong, Tony Touch, Rich Medina @ Santos Party House
Five, yes FIVE, legendary DJs from the 90s and beyond team up for an unforgettable night of hip hop, soul, and everything under the sun. Highly recommended for fans of the era, deep grooves, or people who just like to get down.

Bent Shapes, Shark?, The Doubts @ Silent Barn
If you missed Boston's Bent Shapes when they were in town last weekend, here's another chance to catch them. Their new album, Feels Weird, is filled with hooky, smart indiepop.

Anthony Naples, Lemonade (DJ set), Blouse (listening party) @ Topside Bar at SmorgasBar (FREE)
Captured Tracks kicks off it's CT5 weekend with this free event that starts with a listening party for Blouse's new album and continues with DJ sets after that.

Taj Mahal @ City Winery
The blues rock legend has been putting out records for 45 years and, at age 71, is still going strong, performing over 150 shows a year. This is his first of two City Winery shows this week.

Dave Chappelle, Flight of the Conchords @ Comcast Theatre (CT)
Funny or Die's travelling Oddball Comedy & Curiosity Festival doesn't stop in NYC proper, but it's not too far away tonight (Hartford, CT) and features a killer line-up of funny people.

Stephen Brodsky, Snake Oil, PC Worship @ Saint Vitus
Stephen Brodsky has been known for his work in some very heavy bands (Cave In, Converge), but as a solo artist, he takes a much softer approach. He'll still feel home at Brooklyn's mostly-metal bar Saint Vitus though, and that's where you can see him tonight.

If you were planning on seeing India.Arie @ BAM tonight, it's been cancelled.