Bat for Lashes at Webster Hall 2009 (more by Bao Nguyen) 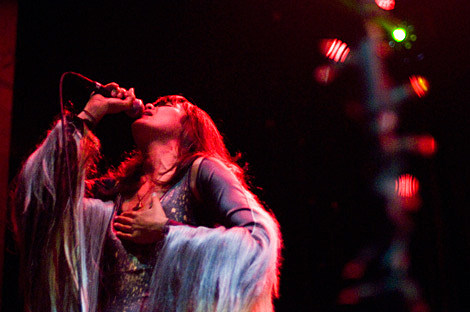 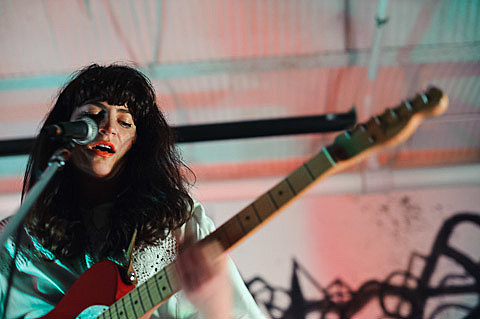 Bat For Lashes, Barbarian @ Webster Hall
It's pretty exciting that Bat For Lashes is on the road supporting Depeche Mode this year, and while that tour is about to roll through the NYC-area, tonight we get a chance to see her play a longer set at a smaller venue when she headlines Webster Hall.

Blouse, Donovan Blanc, Writer @ Glasslands
This is a kickoff show for Captured Tracks' two-day CT5 fifth anniversary party, with a headline set from Blouse. It also doubles as a record release party for their new album, Imperium.

Ty Segall, David Novick @ Bowery Ballroom
Ty Segall releases a lot of records (like, a lot) but they're all pretty different. Sleeper finds him in acoustic mode and expect the same from tonight's show. Last night at MHoW, he and his band played the new album in full plus assorted "hits" while sitting down...and people still stage dived.

Bambara, Dusted, Rituals, Rarechild @ Cake Shop
In the tradition of bands like The Birthday Party and A Place to Bury Strangers, Brooklyn trio Bambara like it dark and loud. Their new album, Dreamviolence (stream it below), just came out on vinyl this week and tonight is the record release show for it. They've surrounded themselves with some equally noisy company, including Canada's equally awesome Rituals. Meanwhile, Brian of Holy Fuck will also be making not-noise with his softer, indie pop project, Dusted.

Har Mar Superstar, Rewards, Son of Stan @ Knitting Factory
Entertaining goofball Har Mar Superstar can turn any place into a sweaty party, given his ability to mimic '80s R&B and funk... he can breakdance too.

The So So Glos, Diarrhea Planet @ Mercury lounge
The So So Glos play around NYC a lot, but what's most exciting about this bill is that Nashville garage punks Diarrhea Planet will be in town. They just released their crunchy, melodic new album, I'm Rich Beyond Your WIldest Dreams, which you can stream at SPIN.

YACHT, Ludwig Persik, Ryan Power @ Music Hall of Williamsburg
YACHT are reliably a good time live and they've got the catchy tunes to back their live show. "Psychic City" and "Dystopia" always make for some good sing/dance-alongs. Get there early 'cause the support on tonight's show is good too.

Wrekmeister Harmonies, Survival, Theologian @ Saint Vitus Bar
This is Wrekmeister Harmonies in "big band" mode and 15 strong, featuring members of Indian, Anatomy of Habit, Corrections House, Yakuza and more. Making it an even better night, Hunter Hunt-Hendrix's (Liturgy) other band Survival is on the bill too. Sure to be wild, and tickets are still available.

Cajmere @ Cielo (Electric Zoo Afterparty)
Chicago house vet Cajmere has been pretty active this summer, having come to NYC back in June, and he's taking part in this Saturday's Warm Up. But that's not all because tonight he'll be controlling the boards at an Electric Zoo afterparty.

The Front Bottoms, Dads, Kevin Barnett @ Stone Pony
NJ's The Front Bottoms are one of the punk/emo bands added to Made In America last minute, but before they head there, they'll squeeze in a show in their home state tonight at the Stone Pony. Their newest album, Talon of the Hawk, is catchy, lyrical, and one of the most fun albums of this summer.