Danny Brown at Summerstage in 2012 (more by Chris La Putt) 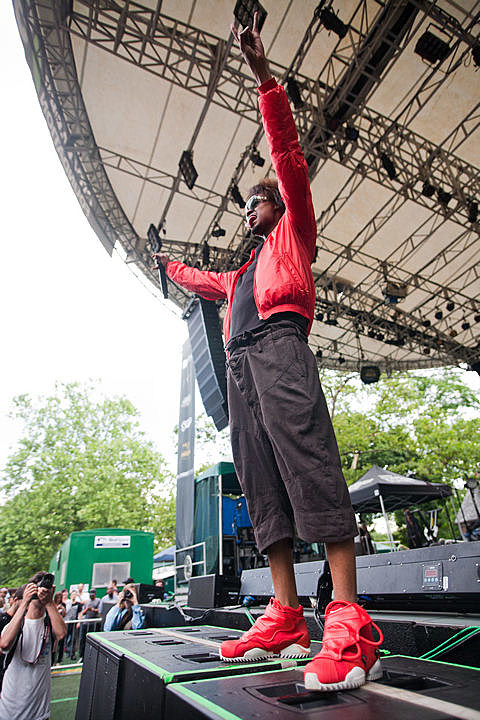 Fool's Gold Day Off w/ Danny Brown, Run the Jewels, A$AP Ferg, Migos, World's Fair, Party Supplies & more @ Williamsburg Park
Fool's Gold's free annual Labor Day show has its most killer lineup yet this year, and they've moved from the City Winery backyard to the larger Williamsburg Park for it. Free with RSVP (which is now closed), but even if you RSPVed, it's first come, first served. Keep the party going at Brooklyn Bowl for the Fool's Gold Night Off afterparty, hosted by Bodega Bamz.

Giuda, Livids, Andy Animal's Cannibal Tribe, 45 Adapters @ Cake Shop
If you're worn out from the long weekend and a bellyful of bbq, muster up just a little strength and get yourself to Cake Shop for Italy's Giuda whose music is part glam and part Oi and all fun. Expect a wild crowd and a lot of Fred Perry polos. And get there early for Eric Davidson's (New Bomb Turks) new-ish punk band Livids.

Walter TV, Jerry Paper @ Death By Audio
Mac DeMarco just played two shows in NYC and now he's onto a third with his other band, Walter TV. He's more of a team player here rather than in spotlight mode and you can check out WTV's cassette release, Appetite, below.

Plus, check out our top 10 Labor Day weekend picks.