Laura Marling at Prospect Park in 2012 (more by Jessica Amaya) 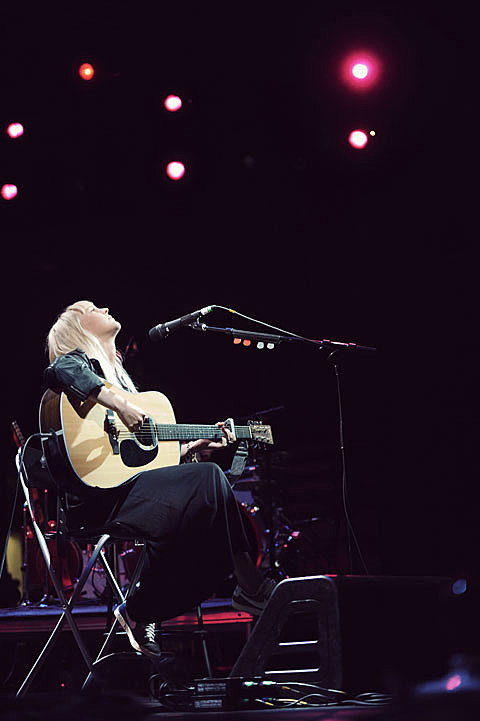 Depeche Mode, Bat For Lashes @ Jones Beach
The most popular synthpop band of all time with enough hits to fill a setlist, Depeche Mode will probably play too many new songs for your liking, but you'll forget all about that by the time they get to "Personal Jesus" and "Never Let Me Down Again." Openminded attendees should get there early for Bat for Lashes.

Laura Marling @ Music Hall of Williamsburg
British folk singer Laura Marling's music may be highly indebted to the genre's early '70s period, but it's some of the most genuine material in that style being written today. Tonight she begins her two-night run at Music Hall of Williamsburg (both sold out), and on Wednesday she'll play a free show at Brooklyn's St. Ann's Church.

Jason Bartell (of Fang Island), Xander Duell, James Thomas Marsh @ Union Pool (FREE)
The full Fang Island band will be here in October when their tour with Tera Melos hits Bowery Ballroom, but if you can't wait that long for your dose of noodly shredding, you can catch singer/guitarist Jason Bartell playing a free show at Union Pool today. 5 PM start.

Goapele @ S.O.B.'s
Oakland neo-soul singer Goapele, who has collaborated with Hieroglyphics and Mos Def, among others, will be making her way to NYC tonight to headline a show at SOB's.

Glenn Tilbrook @ City Winery
One half of one of the best songwriting teams of the last 35 years, Squeeze's Glen Tilbrook will pull from that deep cannon of catchy tunes tonight. Funny guy too.

Holy Smokes! Fest @ Silent Barn
The folks at Bushwick Daily put together this all-day festival featuring over 20 bands (Raccoon Fighter, The Can't Tells, Cosmonaut among them), art installations and an open beer bar from 2 - 4 PM.

Hannibal Buress does his weekly comedy night at Knitting Factory.