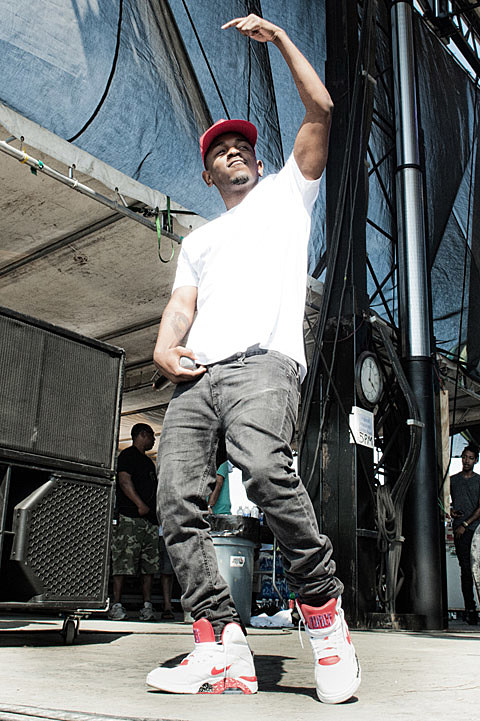 ARMS, Common Prayer @ Mercury Lounge
After taking time off for life stuff, ARMS are back with an appealing new EP and tonight's the record release party.

Body/Head (Kim Gordon & Bill Nace), YOSHIMO, Noise Nomads @ Union Pool
Sonic Youth may not have a future, but the members have all been keeping very busy. Tonight Kim Gordon celebrates her noisy new Body/Head album with a sold-out show at Union Pool, one of a few upcoming dates the duo has in NYC. Opening the show is YOSHIMO of Boredoms (who also just played the NYC stop of Station to Station) and Noise Nomads (aka Jeff Hartford), who has been a favorite of Sonic Youth members for a while now.

Kendrick Lamar, Ab-Soul, Jay Rock, Bishop Nehru @ Williamsburg Park
In the past year Kendrick Lamar has released one of the greatest rap breakthrough albums in recent memory, toured relentlessly (multiple NYC shows included), appeared on other huge songs ("Fuckin' Problems"), destroyed the competition ("Control"), and done a ton of other notable things that you probably don't need me to name. Needless to say, he's kept us very interested, so his return to NYC for the umpteenth time this year is a welcome one. Supporting him at tonight's show is Black Hippy crew mates Ab-Soul and Jay Rock, plus young upcoming Brooklyn rapper Bishop Nehru.

The Stepkids, Starlight Girls @ Mercury Lounge
Former backup musicians for Alicia Keys, Lauren Hill and 50 Cent, this Connecticut trio make funky pop on their own. This is a record release show for their new album, Troubadour, which tones down the psychedelic soul in favor of '70s AM gold.

Blink 182 @ Starland Ballroom
blink-182 are on the second of three intimate NYC-area shows -- which inspired us to make the argument they're actually an important and influential band -- and tonight's (like tomorrow's MHOW show) is also a benefit. Proceeds benefit Sandy Relief and cancer/diabetes research and treatment, and opener New Beat Fund's t-shirt sales will support those charities as well. Sold out.

Spiritualized, Guy Blakeslee @ Webster Hall
Spiritualized have been through town more than a few times in the last year, but with an album as strong as last year's Sweet Heart, Sweet Light, they're worth seeing again.

Hess Is More, Ane Trolle, Naja Rosa @ Cameo Gallery
A mighty live force capable of DFA-style dancerock, Hess is More are always worth checking out live. This will be your first of three chances to do so this month as part of their September "Hessidency."

Zuul, Villains, Throaat @ The Gutter
No need to call Ghostbusters, the coming of this Zuul -- from Carbondale, Illinois, not the underworld -- doesn't signify the return of The Destructor, though their NWOBHM-style riffage is bulldozer strength. Joining them is NYC sleaze metal band Villains, and Throaat, who have members of Natur and Wizardry.

Kate Boy, ASTR, Young Heel @ Glasslands
This Swedish outfit -- who channel Big '80s pop like Peter Gabriel and Kate Bush -- are in NYC for two shows, tonight being the first. They'll play Mercury Lounge tomorrow. Check out their video for "The Way We Are" below.