Vampire Weekend at Roseland in April (more by Robert Altman) 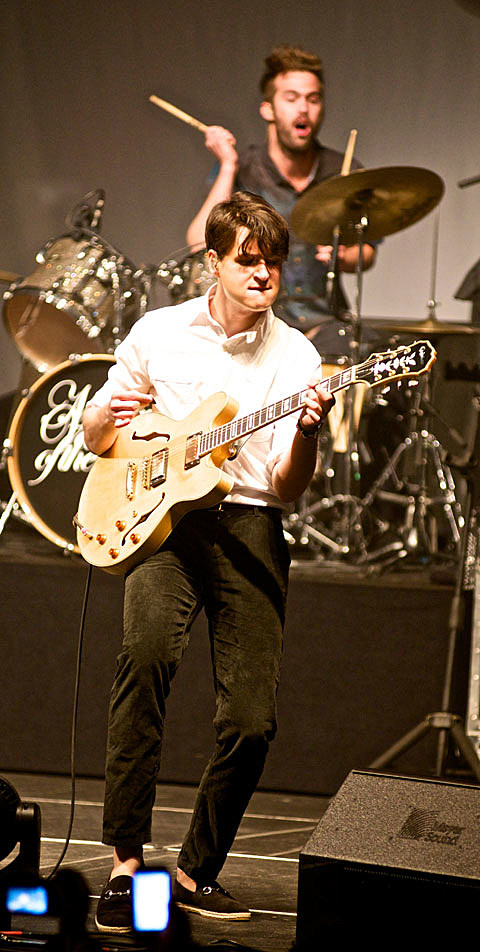 Vampire Weekend, Solange, Sky Ferreira @ Barclays Center
FIve years ago, when "A-Punk" was playing everywhere you went, it wasn't entirely predictable that Vampire Weekend would still be achieving baroque pop excellence three albums in. But that's what they've done, and in celebration of that, tonight they try out their skills as an arena rock band at Barclays Center. Get there early for the Dev Hynes-associated pop of Solange and Sky Ferreira.

Pixies, Parquet Courts @ Bowery Ballroom
Pixies might have lost Kim Deal as a member (they have Kim Shattuck of The Muffs in her place) and you might not be huge on their new EP, but this is still three of the four original members of one of the most classic indie rock bands of our time, playing relatively intimate venues. Tonight they wrap up their four-night run in NYC at Bowery Ballroom. Parquet Courts, who can headline a venue that size on their own (and will do so soon) open the show.

Cosmic Psychos, Pampers, Call Of The Wild @ Cake Shop
Australian farmers/proto-grunge band Cosmic Psychos are currently celebrating their 30th anniversary as a band and are touring North America for the first time in a very, very long while. Tonight's the first of two shows at Cake Shop and is with one of NYC's best new(ish) bands, Pampers.

Nude Beach, Suspicious Beats, Honey @ Mercury Lounge
Brooklyn rockers Nude Beach, who take a punky approach to the classic-style of tunes of Bruce Springsteen and Elvis Costello, play one of their many local shows at Mercury Lounge tonight. Always a good time.

The Selecter @ Gramercy Theatre
While not as well known as their 2-Tone brethren, UK ska vets The Selecter are still essential listening for anyone who owns an album by The Specials or The Beat. Singer Pauline Black is still a pistol live, too.

Phaeleh, The-Drum @ Glasslands
UK atmospheric dubstep producer Phaeleh is over in the US right now, and tonight he'll be bringing the vibes to Brooklyn for a show at Glasslands. Opening is Chicago's also-impressive production duo The-Drum.

Patti Smith @ Metropolitan Museum Of Art
Patti Smith just announced some club dates, but if you've got tickets to tonight's sold-out event at the Met, you can see her in a less-rock environment doing a tribute to Hildegard of Bingen.

Death In June @ The Bell House
While Douglas P is the sole orignial member at this point, uber-influential and controversial neofolk band Death in June are still pushing buttons.

DTCV, No Sky God @ The Bowery Electric
Jim Greer spent time in Guided by Voices and, for many years, was one of SPIN's best writers. His band DTCV (pronounced "detective") make post-VU indie rock.

Bad Side, Fuck SS, Brain Slug, Pleasure Industry @ Acheron
Bad Side, who Paint It Black called the best current hardcore band in Philly, and who will open for Kill Your Idols at Santos in November, will be in NYC tonight to headline a show at Brooklyn punk/metal club Acheron. Also on the bill is fellow Philly band Fuck SS and two Brooklyn punk bands, Brain Slug and Pleasure Industry. Stream Bad Side's just-released Everybody Wants Something From Me 7" below.

Fred Frith @ Roulette
Avant-garde guitar great is performing his 1980 album Gravity at Roulette with a large group of musicians. If you can't make it tonight, he does it again tomorrow too.

The Lindsey Buckingham Appreciation Society, Dave Hill @ Littlefield
Fleetwood Mac's world tour has already hit NYC so what's a fan to do tonight? Go see this skilled tribute act perform Tusk in its entirety. Plus our pal Dave HIll opens and, just guessing, might make an appearance for a guitar solo or two.

Bad Side - Everybody Wants Something From Me