Austra at MHOW in 2012 (more by Amanda Hatfield) 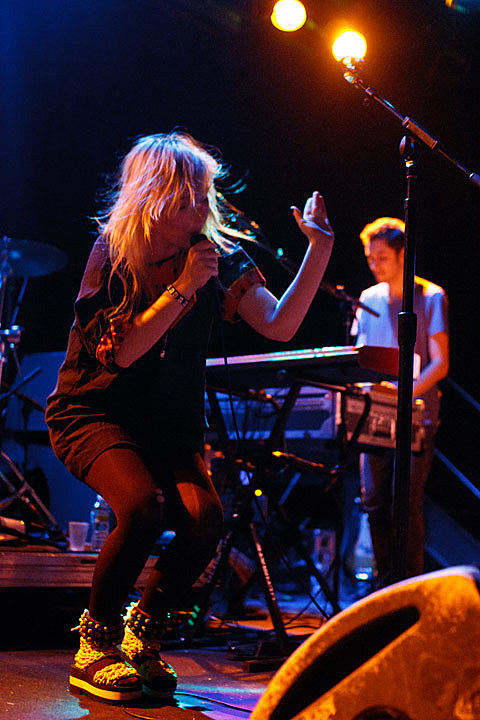 CHVRCHES, XXYYXX @ Terminal 5
Scottish electropop trio CHVRCHES have gone from playing Mercury Lounge in March to Terminal 5 tonight, all without an album out. That changes this week with the release of The Bones of What You Believe. Before they go on, XXYYXX will get your feet moving too.

Austra, Diana @ Webster Hall
Toronto goth pop band Austra now have two excellent albums under their belts, and anyone who's seen them knows their animated live show more than does them justice.

Jon Spencer Blues Explosion @ Passenger Bar (FREE)
It's always a treat to get sweaty with Jon Spencer, especially a free tiny show like this.

Jonah Matranga, Psychic Friend @ Mercury Lounge
Far frontman Jonah Matranga has previously recorded solo music as Onelinedrawing, but for his new album he's doing it under his own name, and if the sound of this new song is indicative of what's to come, it sounds like he's going in an acoustic direction. Tonight's Mercury Lounge show is being opened by Psychic Friend, aka Will Schwartz (of Imperial Teen and Hey Willpower), who makes Todd Rundgren style piano pop.

Lady Lamb The Beekeeper, Cassandra Jenkins @ Glasslands
Brooklyn folk singer Lady Lamb the Beekeper released an impressive new album this year, and she's spent a lot of time on the road in support of it. But now she's back home, and will play a local show tonight.

The A-Bones, Lenny Kaye, Andy Shernoff & more @ Bowery Electric
Bowery Electric hosts the Waggytail Rescue 10th Anniversary tonight with quality garage rock, punk, and the like from The A-Bones (who count Yo La Tengo's Ira Kaplan as a member), Lenny Kaye (Patti Smith Group), Andy Shernoff (Dictators), and more. More info and full lineup at the Facebook event. Next month, The A-Bones play The Bell House with The 5.6.7.8.'s.