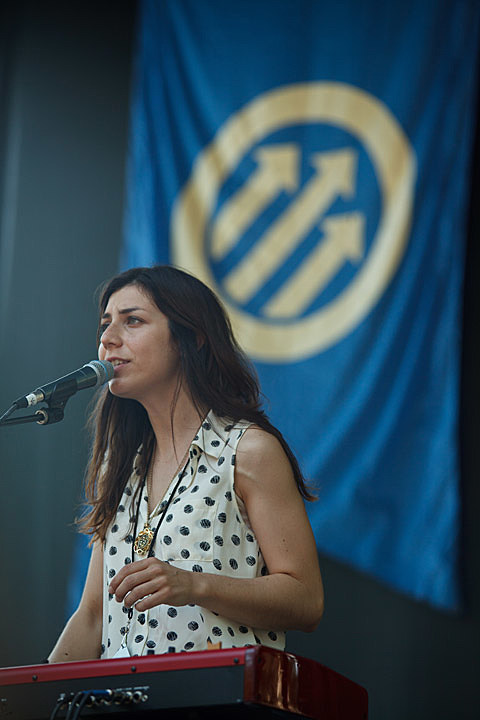 Julia Holter, Nedelle Torrisi @ Music Hall of Williamsburg
Julia Holter has been a-record-a-year since 2011's Tragedy (the album that began gaining her widespread recognition), and she never stops progressing. After last year's experimental bedroom pop opus, Ekstasis, she's moved further into the realm of contemporary classical and jazz styles on this year's Loud City Song, but is still highly melodic and lyrical. Catch her bringing her many sounds to Music Hall of Williamsburg tonight, and don't miss Nedelle Torrisi (formerly of Cryptacize, and fka Paradise), who also makes some solid art pop.

Iamamiwhoami, ITAL @ Brooklyn Masonic Temple
This Swedish art pop musician (real name Jonna Lee) has been getting some buzz over the last couple years for her sound that brought to mind artists like Bjork and The Knife. Tonight she makes her US debut, and ITAL should get everyone in a good mood before she goes on.

Hess Is More, SH101, Nightmare, Tippy Toes @ Cameo Gallery
A mighty live force capable of DFA-style dancerock, Hess is More are always worth checking out live. This will be your last chance to catch them as part of their September "Hessidency" and could easily be the best of the bunch, as a Hess-Tippy-Toes supergroup seems like a definite possibility.

Failures' Union, Chandeli'ers, Magnets @ Death By Audio
Failures' Union make alt-power pop like '90s radio rock and teen movie soundtracks never went out of style, with a bit of a country twist. Their new record drops this fall, but if you head to DbA tonight, you'll likely get to hear some of its tracks.

Lia Ices, My Body, Wilsen @ Glasslands
Lia Ices has been pretty quiet lately, but the Justin Vernon associate is back, playing this hometown show before she heads across the country for the Oakland stop of the Station to Station tour. If you like Lia's delicate style of folk, there's a good chance you'll like opener Wilsen too.

The xx, Polica @ Radio City Music Hall
The xx and Polica are two groups with a knack for tackling indie pop, R&B, and electronica all at once, so this matchup should make for a great double bill. Tonight they take on their second of two nights at Radio City Music Hall. Tickets are still available.

Local Natives, Wild Nothing @ Terminal 5
Local Natives released Hummingbird at the beginning of this year and their trajectory continues to climb, having played Governor's Ball back in June and tonight's the first of two nights' at T5.

The Lumps, The Moon Dudes, The Hairs @ Union Pool
Formerly of San Diego then San Francisco, Lumps now call NYC home. Though it's just one guy and a drum machine these days, Lumps still crank out nasally garage-pop as can be heard on their new album, Love, LUMPS. You can stream it below and tonight.

Lionel Richie @ Barclays Center
The former Commodore and all-around hitmaker will draw from 40 years worth of pop and R&B for tonight's big show at Barclays. Will it go All Night Long? Truly, that would be something.

Earth, Wind and Fire @ Beacon Theatre
Some people may be torn tonight between seeing Lionel Richie or going to see soul/disco/R&B titans Earth Wind & Fire at Beacon. And who wouldn't want to hear "September" in September?

Chromeo, Snarkitecture @ Milk Studios
Sometimes cheese is not a bad thing. Electrofunk duo Chromeo, whose new album White Women is out soon, own their fromage. They'll be previewing that record tonight -- free but RSVP is closed.

Graham Nash @ City Winery
The "Nash" in Crosby, Stills & Nash, one of the songwriters in '60s pop group The Hollies, and a reputable solo artist as well, Graham Nash begins his three-night run at City Winery tonight.