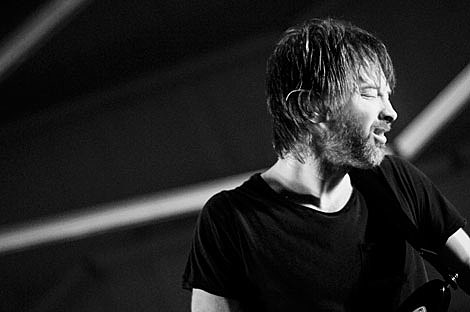 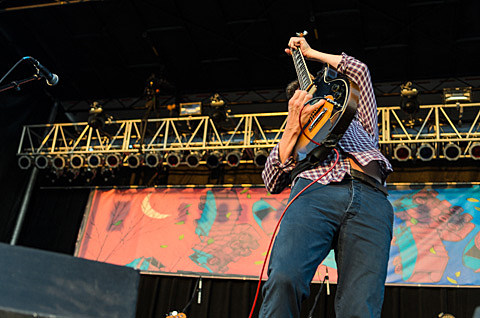 "We Have An Anchor" @ BAM
Jem Cohen presents his new work as part of BAM's Next Wave Festival, a cinematic tribute to Nova Scotia with live music by a band that reads like an ATP line-up: Guy Picciotto (Fugazi), Jim White (Dirty Three), Efrim Manuel Menuck and Sophie Trudeau (Godspeed You! Black Emperor, Thee Silver Mt. Zion), and more. Tonight's the second of three performances.

Atoms for Peace @ Barclays Center
Though Thom Yorke might love dancing on stage no matter what band he's in, Atoms for Peace gives him a great excuse to do so. The first album as a full band, this year's AMOK, is possibly Thom's most beat-oriented album yet. Expect to hear much of that, much of Thom's solo record, The Eraser, and some other surprises from throughout his career thrown in as well.

Superchunk, Spider Bags @ Bowery Ballroom
One of America's quintessential indie rock bands remain at the top of their game: the new I Hate Music is packed with hooks and, live, Mac can still land a flying leap off the drum riser. The first of two sold-out out shows at Bowery.

US Girls, Spacin', Onakabazien, DJs Pete Swanson & Slim Twig @ Death By Audio
Toronto experimental pop artist U.S. Girls (aka Meg Remy) is back in Brooklyn tonight to play a release show for her new EP, Free Advice Column. Also on the bill is hip hop producer Onakabazien (who collaborated with her on the new EP) and Philly garage rockers Spacin' (who, like Purling Hiss, have ties to Birds of Maya).

Aeroplane, Light Year, JDH & Dave P @ Highline Ballroom
Better known for his killer remixes -- like the one for Friendly Fires' "Paris" featuring Au Revoir Simone -- then his originals, Aeorplane (aka Belgium's Vito de Luca) is a master DJ who knows how to set a dancefloor soaring. Check out a stream of his "All Night Long" mix below

The Legendary Pink Dots, Orbit Service @ Knitting Factory
Edward Ka-Spel and Phil Knight have been making gothy, baroque psychedelia for over 30 years and remain shockingly prolific: The Gethsemane Option, is their... we actually lost count how many records they've released. Legendary indeed.

Portugal. The Man, Crystal Fighters @ Terminal 5
These proggy alt-rockers returned with a Danger Mouse-produced album earlier this year, and if you can picture what Portugal. The Man and Danger Mouse would sound like together in a studio... well that's kinda what this sounded like. Check out the weirdo-funky sounds at Terminal 5 tonight.

The Eugene Mirman Comedy Festival @ The Bell House
Night Two of the EMCF features two shows at The Bell House: early its "Startalk: Live" with hosts Neil deGrasse Tyson and Eugene Mirman welcoming a bunch of surely big name surprise guests (sold out); the late show is "Invite Them Up!" with Bobby Tisdale, Eugene Mirman, Michael Che, Mehran Khaghani, Michael Ian Black, and Todd Barry. You can still get tickets to that one.

Richard Thompson, Teddy Thompson @ Town Hall
Folk legend and guitar hero Richard Thompson has been touring pretty much constantly since the release of his new album, Electric, back in February. Tonight he keeps things all in the family - his talented son, Teddy, opens.

The Suburbs, Shake the Baron @ Mercury Lounge
Secret show theorists back off! The Arcade Fire may be in town for SNL, but this is The Suburbs, the cult Minneapolis new wave band who just released the not-bad-at-all Si Sauvage, their first album in 27 years.

John Zorn @ Miller Theatre
Avant-sax great John Zorn continues his Zorn at 60 concerts that have been going on all year.

toe, Birthmark @ Glasslands
Japanese post/math rockers toe have been around for over a decade, and this year they're getting a career-boost in North America, as they're re-releasing some material on Boston label Topshelf Records and touring here. Tonight's show is with Birthmark, the solo project of Nate Kinsella, who also has a long history in '00s math rock. Sold out.

Forest Fire, Zachary Cale, Metal Mountains @ Union Pool
For those into psychedelia and folk, all three artists on this lineup do that sound well, and this one's not to miss.

Sidi Toure @ Highline Ballroom
Legendary Malian blues singer/guitarist has a new album out on Thrill Jockey, and he's currently back in North America for a tour. If you're unfamiliar, you can read more about him here.