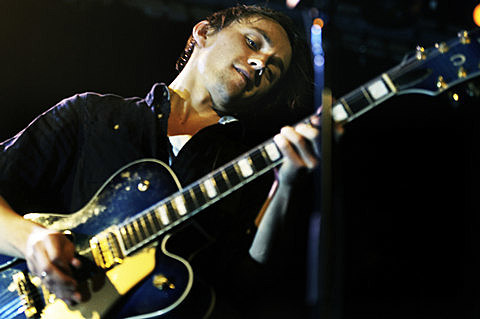 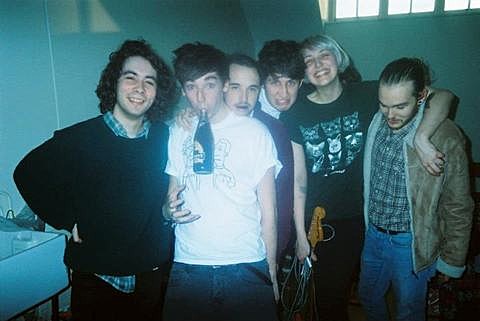 The CMJ Music Marathon starts today and runs through Saturday (10/19) and NYC, which has no shortage of worthy shows on any given night, and explodes into an overload of options. Browse our full NYC show calendar for all of tonight's shows. We've got tonight's highlights here and more CMJ (and non-CMJ) options further down.

Ghost Wave, Streets of Laredo, Electric Wire Hustle, Black City Lights, Tiny Ruins @ Le Poisson Rouge (FREE)
Tonight's the now-annual New Zealand showcase at LPR, with a disparate group of performers. We like the folk-y Tiny Ruins and the more VU-ish (if badly-named) Ghost Wave. This show is free and always a good way to start your CMJ.

Mark Lanegan, Sean Wheeler, Zander Schloss @ Gramercy Theatre
Mark Lanegan spent the mid-'80s up to the turn of the millennium fronting pioneering grunge band Screaming Trees, and has since done notable collaborations with Queens of the Stone Age, Greg Dulli (Afghan Whigs), Isobel Campbell (Belle and Sebastian), and more. He's also a solo artist, and his newest record is a covers album that features his interpretations of John Cale, Nick Cave, Chelsea Wolfe, and many others.

Joanna Gruesome, The History of Apple Pie, Free Time, Celestial Shore, Body Parts, Weaves, Geoffrey O'Connor @ Ran Tea House
This will be the first CMJ shows for UK bands Joanna Gruesome (indiepop with fangs) and The History of Apple Pie (twee shoegaze) and the whole evening is pretty good. Moved from Baby's All Right (which won't open till Friday).

Brian Wilson, Jeff Beck @ Beacon Theater
The band who currently tours as The Beach Boys may not include their main songwriter Brian Wilson as a member, but Brian's on the road with fellow ex-Beach Boys Al Jardine and Dave Marks, plus guitar maestro Jeff Beck, playing a ton of favorites from The Beach Boys' career. Tonight's show is also special, because it's one of the few dates on the tour that also includes Blondie Chaplan, lead singer of Beach Boys tune "Sail On Sailor."

Placebo, Jesca Hoop @ Terminal 5
Glammy, gothy, androgenous, and more than a little melodramatic, Placebo know how to work all that to their advantage.

Milagres, Ghost Wave, Beach Day, The Box Tiger, CONJJJECTURE, Traumahelikopter, Owel @ Pianos
Lots of good bands on this Pianos bill, but one in particular worth highlighting is Owel, who make the kind of pretty, somewhat-technical emo that some people call "twinklecore," mixed with pretty epic alt-rock. They're on at 1 PM.

Tropic of Pisces, Ace Reporter, Courtney Barnett, Saint Rich, Spires, Total Slacker, COIN, Echo Friendly, Dream Shake @ Pianos
Also lots of good people on this Pianos bill, and the one we really think you shouldn't miss is Australia's Courtney Barnett, who mixes '60s-style psychedelic rock with witty songwriting. And actually if you're into that kind of psychedelia, don't miss Brooklyn's Spires either.

Cults, Lucius, Conway, Yup Deceiver (DJ) @ Brooklyn Bowl
Cults' new album, Static, is out today and this is a record release show of sorts, which is free with RSVP (or your CMJ badge).

Nine Inch Nails, Godspeed You! Black Emperor @ Prudential Center
Trent Reznor and crew released their first NiN record in five years and their tour with equally intense openers Godspeed are in the NY area for two shows, this being the second.

Hippy, Caged Animals, Norwegian Arms, Radical Dads, Spirit Plate @ Muchmore's
If you're coming to CMJ from out of town and want to catch some of Brooklyn's local indie rock talent, this unofficial showscase with Hippy, Radical Dads and Caged Animals is a very good option.

Main Attrakionz, Davinci C, Hefna Gwap, Good Kids @ Santos Party House (FREE)
There's not too much rap at CMJ, and this show isn't actually an official CMJ show anyway, but it's a good warm up for the week, and totally free.

Low Fat Getting High, Big Ups, Vulture Shit, Flagland, Hive Bent, A Guide to Rational Living @ Shea Stadium
These local punk bands team up together a lot, but if you're into intense, rowdy DIY shows, it's one hell of a team.

Iceage, Pharmakon, Believer/Law, Cold Ones @ The Acheron
Danish punks Iceage have hit NYC a few times this year, and this two-night stand at Acheron will be their last one before the year ends. Even when they play a bigger place like Bowery Ballroom, Iceage act like they're in a tiny punk joint, so they should feel right at home here. If you're going, don't miss industrial noise artist Pharmakon and Cult of Youth-related EBM band Believer/Law. UPDATE: Due to unforeseen circumstances, Pharmakon dropped off the show.

Lovelife, Alec Benjamin, Kirin J Callinan @ The Standard
Aussie artist Kirin J. Callinan, intense and gothy, highlights this free show at The Standard, one of many shows he's playing this week. You do need to RSVP by emailing aohayon@standardhotel.com.

More notable Tuesday options are listed below, but for all of tonight's shows, and tomorrow's, check out our full NYC show calendar.