Franz Ferdinand at Glasslands in 2013 (more by PSquared) 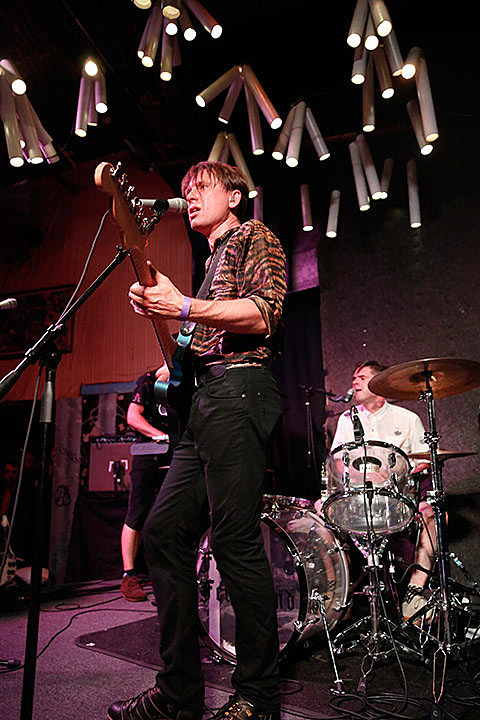 Franz Ferdinand, Frankie Rose @ Hammerstein Ballroom
Franz Ferdinand are out on the road in support of their fourth album, Right Thoughts, Right Words, Right Action. The band have always been a lot of fun live, so expect an entertaining show. Go early for Brooklyn's Frankie Rose.

Weekend, Disappears, Nothing, DJ Maria Sherman, DJ Jenn Pelly @ Glasslands
Do you like it dark and noisy? Here's the perfect triple bill. Both Weekend and Disappears have gotten gothier on their respective new albums and openers Nothing (who just played one of our CMJ parties) are just plain heavy. Earplugs highly recommended for this one.

Fiona Apple, Blake Mills @ Beacon Theater
Fiona Apple and Blake Mills are doing two nights of "Anything We Want" at Beacon Theatre this week. What exactly does that mean? Back in July they said, "We know it'll be something special, and we aren't being coy here -- it's just that we have about 26% of an idea of what the fuck we will be playing for you" and that "the uncertainty excites us." They've probably figured out more of the set by now.

Man Man, Xenia Rubinos @ Bowery Ballroom
Weirdo rockers Man Man are back with their new On Oni Pond LP, and this week their tour in support of it hits NYC for two shows with arty local songwriter Xenia Rubinos.

X-ray Eyeballs, The Funs, Rips, Truthers @ Death By Audio
X-ray Eyeballs are stripping down and playing acoustic for this show, which also includes a set by sloppy Chicago rockers The Funs, and two other local bands, Rips and Truthers.

Noah And The Whale, Spires @ Irving Plaza
It's been about five years since Noah & the Whale released "5 Years Time"... maybe they'll joke about that on stage? If you're going tonight, make a point to go early and check out jangly psych-pop band Spires who open the show.

Foxygen, Ben Chatrer, Jungle Green @ Music Hall of Williamsburg
Foxygen's Jonathan Rado was just in NYC playing a bunch of CMJ shows, and now the whole band is here for a 2-night stand of their '60s-style baroque/psych pop and Jim Morrison-style stage antics.

Boys Noize, Jimmy Edgar, Braille @ Output
Boys Noize gets associated with the EDM scene these days, but this week he does two nights at the intimate (for his standards) Williamsburg dance club, which is becoming known for booking forward-thinking electronic music, like tonight's openers, Jimmy Edgar and Braille.

American Sharks, Hector's Pets, Dirty Fences, Nancy @ Union Pool
Austin stoner rockers American Sharks were supposed to play with Godflesh this past week and have upcoming dates with Clutch and The Sword, but they also fit in on small garage rock bills, which they did once during CMJ and will do again tonight.

B.B. King @ B.B. King Blues Club
It's his club, he can play when he wants and what he wants.

Eric Burdon @ Bergen Performing Arts Center
Rock legend Eric Burdon has been touring this year, having done two nights in NYC back in May. His current tour doesn't come back to NYC but if you don't mind traveling a bit, there are stops in NJ (tonight) and CT (tomorrow).