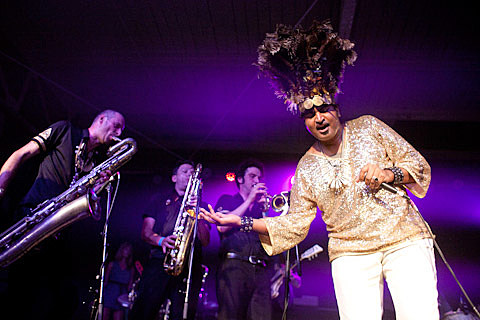 Inter Arma at Hopscotch Fest 2013 (more by Karen A. Mann) 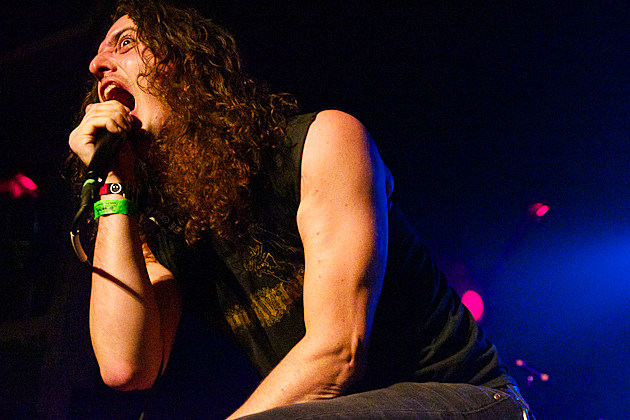 The Broken Circle Breakdown screening @ Knitting Factory (FREE)
Start off your night with a free screening on this acclaimed Belgian drama, a romance set against tattoo parlors and bluegrass bands. It officially opens on Friday but BrooklynVegan is presenting this FREE screening tonight. No RSVP necessary. 7 PM, First come, first served. Trailer for the film is below.

King Khan & The Shrines, Hell Shovel @ Webster Hall
Garage soul party starters King Kahn & the Shrines kicked back into action this year with Idle No More, their first album for Merge. KK shows are always wild but add in Devil's Night to the mix, and who knows what sort of craziness we'll get. Tickets are still available.

Black Tusk, Inter Arma, Descender, No Way @ Saint Vitus
The punky sludge metal of Black Tusk and the psychedelic black metal of Inter Arma make for an excellent heavy double bill. And where better to see it than the black-walled Saint Vitus?

Grand Resort (as New Order), Dead Stars (as Nirvana), Butter The Children (as the Pixies), Le Rug (as At The Drive In), Turnip King (as The Velvet Underground), Honduras (as Green Day) @ 285 Kent Avenue
Halloween is just around the corner (tomorrow!) and these local indie bands are getting in the spirit tonight by "dressing up as" (aka covering) older bands.

Misfits @ B.B. King Blues Club
It's not Halloween without a show from the Misfits, and though their actual Halloween show is in Boston this year, they'll do NYC one night earlier.

Tera Melos, Fang Island, Zorch @ Bowery Ballroom
Do you like guitars? Do you like them fast, noodly, and all over the place, but still catchy? Then you'll love this bill of all Sargent House bands, who will provide a triple attack of fun, fists-raised shred.

Ital, Huerco S., Creep (DJ set), The Range, Aurora Halal @ Cameo Gallery
This bill is not to miss for fans of IDM. Ital is always a great time, Huerco S' brand of minimalism is fantastic, and The Range was one of the hotter names in electronic music at this year's CMJ.

RL Grime, DJ Wonder @ Music Hall of Williamsburg
For a very different type of electronic music, and one to likely have the crowd going a bit wilder than tonight's Cameo show, the exciting, upcoming trap producer RL Grime headlines this sold-out show at MHOW tonight.

Chance The Rapper, DJ Rashad & Spinn @ SOB's
Chance the Rapper has had a pretty successful career thanks to his catchy Acid Rap mixtape, and this week he returns to NYC for two sold out shows at SOB's. This is night two and he's doing two shows (early and late). Also don't miss footwork wizard DJ Rashad.

Nothing Changes w/ You, Ell V Gore @ Home Sweet Home
For some, every Wednesday is Halloween. Get down with darkwave, minimal synth, industrial, EBM, and straight-up goth at this weekly, fog-machine-filled party. Performing live are synthy You and Toronto's twisted Ell V Gore. Believer/Law were supposed to be on this show but they dropped off.

How Was Your Week with Julie Klausner @ The Bell House
Julie Klausner is taping her popular podcast live tonight with a pretty stellar line-up of guests: , Ted Leo, A.C. Newman, Jean Grae, and Laura Benanti. Sold out.

It's Devil's Night. Watch out for mischief!