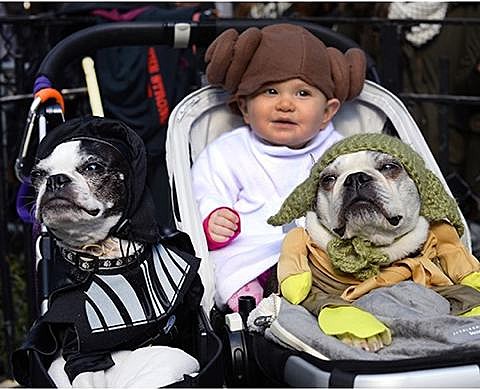 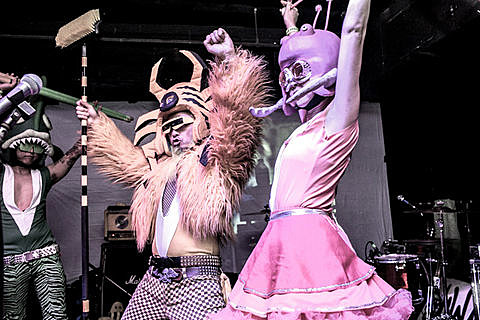 Happy Halloween! As you might imagine, there's many Halloween-related shows tonight, including a number of cover shows, and of course the Village Halloween Parade! Browse our full NYC show calendar for all of tonight's spooky shows (and the regular ones too). Here are some highlights...

Peelander Z, Ken South Rock, AEON RINGS (formerly Night Vision) @ Glasslands
Another band who always come costumed, Peelander-Z are sure to bring the party tonight. And they've gone hair metal on their new album, so if you're looking for a rowdy, super-fun, hair metal Halloween, Glasslands is the place to be.

The Juan Maclean (DJ Set), Justin Strauss, Evan Michael @ Cameo Gallery
If you're just looking to dance tonight, it's hard to argue with the four-on-the-floor proclivities of the Juan Maclean. Justin Strauss, meanwhile, is a legend with more than three decades of dancefloor experience having worked with everyone from Luther Vandross to Skinny Puppy. It's a late show -- doors at 10 PM -- so you can make it if you want to keep the DFA vibes rolling after Holy Ghost!

The Dickies, Chronic Sick @ Knitting Factory
The Dickies have been making new wavey punk for over three decades, and they're still kicking.

Avan Lava, Light Asylum, Zebra Katz @ Music Hall of Williamsburg
This show's got three very different artists who should all provide very fun sets in their own way. There's the upbeat synth pop of Avan Lava, the dark Light Asylum, and eccentric rapper Zebra Katz, whose "Ima Read" is always a good sing-along at his shows.

Raime, Vatican Shadow, Silent Servant, Kiss & Tell, Further Reductions, Bethany and Alyssa @ Output
Another bill leaning towards the dark and electronic: Raime will be debuting an audio/visual set, and Dominick Fernow's (Prurient) "militant religious industrial" project Vatican Shadow is not to miss either.

Murray Hill, Andy Rourke (The Smiths) (DJ Set), Steve Lewis (DJ Set), Chicks Who Love Guns @ Passenger Bar
Williamsburg's Passenger Bar is hosts this free party with MC duties from none other than legend Murray Hill and a DJ set from The Smiths' Andy Rourke and others. There's also a costume contest for anyone dressed the the "Blood, Burlesque & B-Movie" themes.

The Body, Pissgrave @ Saint Vitus Bar
Crushing duo The Body hold court with Pissgrave tonight at what for some is the only place to be on Hallowwen

Biz Markie (DJ Set) @ Brooklyn Bowl
Questlove usually does his weekly Bowl Train party at Brooklyn Bowl on Thursdays, but for Halloween, Biz Markie is taking over the boards. And he's, he's got what you need.

Jonathan Toubin's Haunted Hop @ Secret Project Robot
This is Jonathan Toubin's annual Halloween Party, and will feature a bunch of bands performing sets as other bands like The Damned, Siouxsie & the Banshees, The Seeds, Roky Erickson and more. They aren't saying who's actually performing, but Jonathan knows a few people. Plus, JT will be spinning classic spooky 45s all night. $5 in costume, $20 without.

Murphys Law, Caught In A Trap, Chesty Malone And The Slice Em Ups, Skum City @ The Trash Bar
The Trash Bar is celebrating Halloween with this show which, among other things, includes long-running NYC punk band Murphy's Law.

Ed Sheeran @ Mercury Lounge
For many of us, there are few things scarier than UK singer Ed Sheeran, who has two shows at Madison Square Garden coming up. We're not sure why he's playing Mercury Lounge tonight, but maybe he's going to show us his dark side. Tickets go on sale today at noon.

Carnivores (as B-52s), Ava Luna (as Tom Tom Club), Caged Animals (as Velvet Underground), Bueno (as Wu-Tang Clan) @ Shea Stadium
This is one of the many Halloween cover shows, but it's especially notable because it's also the only NYC stop on Atlanta garage rockers and Black Lips/Deerhunter associates Carnivores' tour. They'll be playing songs by the B-52s, but also many of their own.

And here's more of those cover shows...

Celestial Shore (as Led Zeppelin), Whoarfrost (as Nirvana), Cloud Becomes Your Hand (does Jock Jams), YOU (as Interpol) @ Silent Barn