My Bloody Valentine at ATP NY 2008 (more by Abbey Braden) 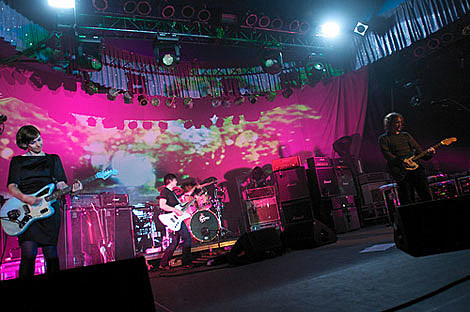 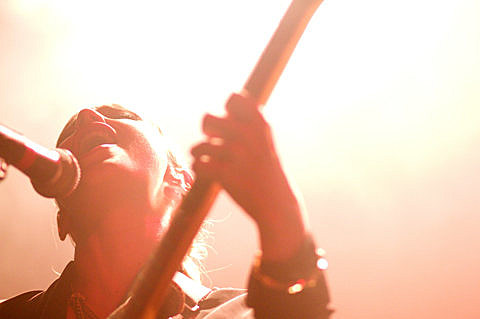 My Bloody Valentine, Dumb Numbers @ Hammerstein Ballroom
Shoegaze vets My Bloody Valentine are nothing short of legends and pioneers, with great material that speaks for itself and some of the most inventive guitar playing of the past few decades. This year they shockingly returned with mbv, this first new album since 1991's classic Loveless, and they've also been doing some tour dates since its release. The tour finally comes to NYC thsi week for shows at Hammerstein Ballroom tonight and tomorrow. Opening is Dumb Numbers, the project of Australia's Adam Harding which features contributions from Dinosaur Jr's Lou Barlow and Murph, Jesus Lizard's David Yow, Melvins' Dale Crover and more. Not positive who's in his live band, but we know Murph is for sure.

Humanbeast, Profilgate, Pvre Matrix, Nick Klein @ 285 Kent Avenue
Two excellent purveyors of minimal/darkwave Humanbeast and Profligate team up for this show at 285 Kent which should turn into a dark, gothed-out dance party.

Mahogany, Domino Kirke, Metalleg, Men and Whales @ Glasslands
Currently working as a duo, local shoegazers Mahogany are back in action after a five-year hibernation.

Dylan Fest @ Bowery Ballroom
The annual Dylan Fest returns for its first of two nights at Bowery Ballroom tonight. The show will feature Bob Dylan classics performed by a number of musicians, including members of Black Keys, The Hold Steady, Heartless Bastards, The Mooney Suzuki, and more.

Today is Veteran's Day. Thank you for your service.