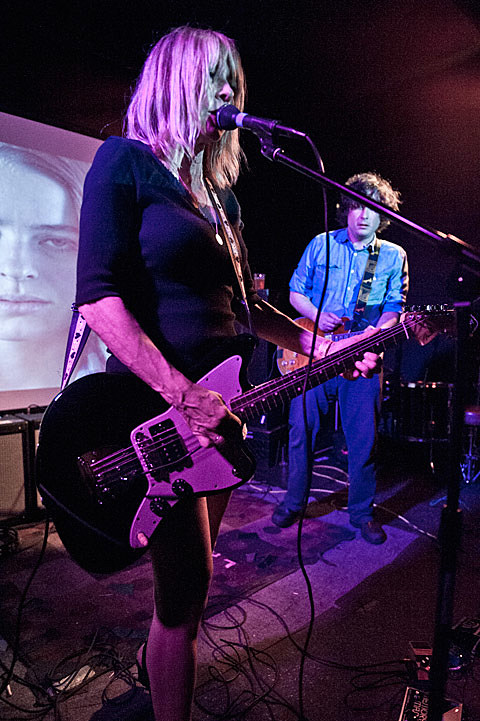 Body/Head w/ Ikue Mori, Kim Gordon and Tim Barnes, J Mascis @ Issue Project Room
This is the first night of the two-night Issue Project Room benefit honoring Kim Gordon, each with different (and interesting) lineups. This one begins with a VIP reception that features Kim performing as a duo with Tim Barnes, and a solo set by Dinosaur Jr.'s J Mascis. Then, the regular portion of the show features Kim's Body/Head project (with Bill Nace) performing a special trio set with no wave legend Ikue Mori in tow.

Active Child, JMSN @ Bowery Ballroom
The synthy Active Child is on the road supporting his new Ropor EP, and that tour brings him to NYC for two shows this week, Bowery Ballroom tonight, and MHOW tomorrow. JMSN, who did a lot of vocals on Kendrick Lamar's good kid, m.A.A.d city, opens both shows.

Nothing Changes w/ Raspberry Bulbs, Plod Blotz @ Home Sweet Home
Raspberry Bulbs have gotten the whole "elements of black metal" thing, but like another band who gets that description (Deafheaven), they're really not much of a metal band. Deafheaven takes stuff in a shoegaze direction, but Raspberry Bulbs make nasty, aggressive punk that begs to be seen live.

Macklemore & Ryan Lewis, Talib Kweli, Big K.R.I.T. @ Theater At Madison Square Garden
We'll save our thoughts on Macklemore, but the openers on this tour, which hits the Theatre at MSG for three consecutive nights this week, are always worth seeing. Talib really needs no introduction, having been a mainstay in NYC rap since the '90s, and Big K.R.I.T. is one of the finest newer rappers keeping the dirty south alive and dirty.

John Fogerty @ Beacon Theatre
Rock legend John Fogerty has over four decades of music, including countless swamp rock classics penned during his time in Creedence Clearwater Revival like "Fortunate Son," "Bad Moon Rising," "Have You Ever Seen the Rain?" and tons more that you'll likely hear tonight, his second of three Beacon Theatre shows this week.

The B-52's @ NYCB Theatre At Westbury
These new wave survivors remain basically a party in a can, and they'll be popping the top tonight.

Native, Solids, Bennio Qwerty @ Saint Vitus
Mathy post-hardcore noisemakers Native have been on the road for a while this year, supporting their new LP Orthodox (out now on Sargent House). Their last trip here was with shiny alt-rockers O'Brother and Daylight, but now they return for an all-around noisier bill. Solids, who just signed to Fat Possum, are a scratchy guitar/drum Canadian rock duo (that might make you think of Japandroids), and Brooklyn's post-punky Bennio Qwerty can make a pretty good racket too.

Deleted Scenes, SWF, Unicycle Loves You @ Shea Stadium
DC spaz-rockers Deleted Scenes are planning to release an LP, Lithium Burn, on February 11 via Park the Van/Nevado, but they're prefacing it with the 7" single "Stutter." Deleted Scenes recently played a hometown show with local heroes The Dismemberment Plan, and from the sounds of this song, they're a pretty great fit. Tonight the celebrate the new single with a release show at Brooklyn's Shea Stadium. Stream the track below.

Paramore, Metric, Hellogoodbye @ Madison Square Garden
Well congrats to Paramore, who have stayed huge enough to headline MSG, but the band we're most excited about on this bill is Canadian indie poppers Metric, who haven't played NYC since headlining Radio City in 2012.

Ty Dolla $ign, Vic Mensa, Deniro Farrar, DJ Getlive @ Knitting Factory
This solid rap show (which you had to enter Scion's contest to get into) features of two of finest up-and-comers in the game at the moment, Vic Mensa and Deniro Farrar, who both made a solid impression on NYC during CMJ.