Amanda Palmer at Temrinal 5 in 2012 (more by Amanda Hatfield) 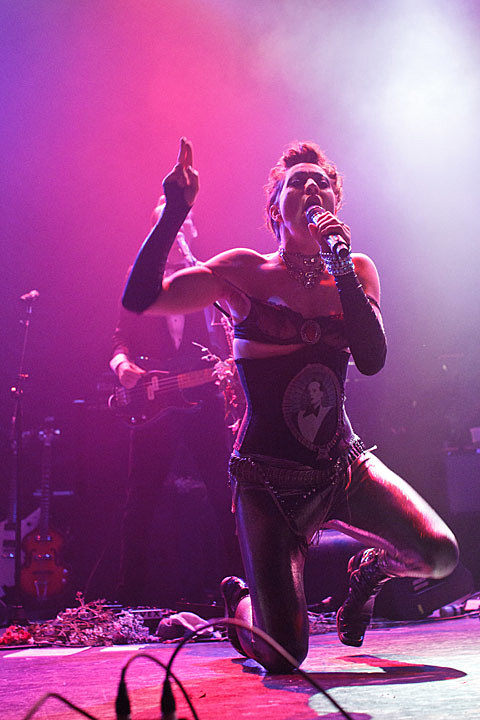 Neil Gaiman, Amanda Palmer @ Town Hall
Amanda Palmer and her fiction-wrtier spouse Neil Gaiman return to NYC for An Evening with Neil Gaiman & Amanda Palmer, "an intimate night of spoken word, songs, stories, chats with the audience, and more than a few surprises." They do the same tomorrow as well.

Jonathan Richman, Hilton Valentine @ Bowery Ballroom
Modern Lover Jonathan Richman has been a continuously active solo artist for decades, and it's been a pretty regular thing that he comes by NYC to do a multi-night run here at least once a year. This is second of two Bowery Ballroom shows.

Grant Hart, Journalism, Little Racer @ Cake Shop
Grant Hart may be not as popular as his former Husker Du bandmate Bob Mould, but he's still got an active solo career as well, which included the release of this year's well-received The Argument.

Ancient Sky, Little Gold, Florida, Giant Peach @ Death By Audio
Local psych rock band Ancient Sky celebrate the release of their new album, All Get Out, tonight. You can stream it in full below.

Shannon and the Clams, Las Rosas @ Mercury Lounge
A lover of vintage rock n' roll and R n' B, Shannon (who spent time in Hunx & His Punx and sang on the last Intelligence LP) brings that fun spirit to her own to this year's Dreams in the Rat House. This is Shannon and the Clams first of two shows in NYC this weekend.

Whores, Black Black Black, No Way @ Saint Vitus
Whores make heavy noise rock, and it makes sense that they're playing a place like Brooklyn's mostly-metal bar Saint Vitus, but these guys appeal to a non-metal crowd too, with hints of Unsane, and other similar bands.