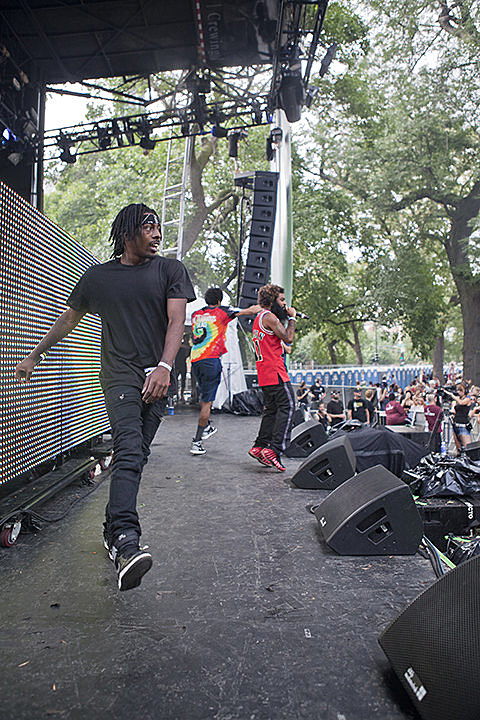 Ida Maria @ Mercury Lounge
Norwegian singer-songwriter Ida Maria, once known for her wildcard electric performances, returns for her first NYC shows in some time. Will "Oh My God" still have the same punch?

Jagwar Ma, Fascinator @ Bowery Ballroom
With a debut album that owes more than a little to the early-'90s Madchester rave scene, Jagwar Ma will be twistin' your mellon (man) with sunshine vibes to spare. Sold out.

Mellowhigh @ Gramercy Theatre
Another bunch of odd rappers, but this time from the opposite coast, MellowHIgh is the trio of Odd Future members Hodgy Beats, Domo Genesis, and Left Brain.

John Grant @ Rough Trade
John Grant's Pale Green Ghosts is Rough Trade Shops' #1 album of 2013 so this show at their new NYC store has potential to be special. Though you can really say that about any John Grant show. Tonight's show is free with purchase of his new LP.

Twin Sister, Leapling, Ava Luna, Celestial Shore, Zula, Empress Of (DJ set) @ Silent Barn
This is a "farewell party" for Big Snow Buffalo Lodge, which shut its doors in July without a proper sendoff. Tonight it gets one...at Silent Barn.

Ask Me Another @ The Bell House
John Hodgman, Lizz Winstead, and Al Jacobs will feature in this "rambunctious hour that blends brainteasers and local pub trivia night with comedy and music." Sold out.

Benji B, Juan Atkins, J. Rocc, Jay Daniel @ The Panther Room
You may know Benji B as the man behind the orchestral rearrangements of Flying Lotus, TNGHT, Kanye West, Drake, Jeremih, and others that surfaced earlier this year. Not sure what he'll be stirring up tonight, but it will surely be a special night, as it's the NYC installment of his London party Deviation. Also on the bill is Detroit techno vet Juan Atkins, Stones Throw associate J.Rocc and Detroit newcomer Jay Daniel. Tickets for tonight's party are still available. Check out Benji B's orchestral video below.