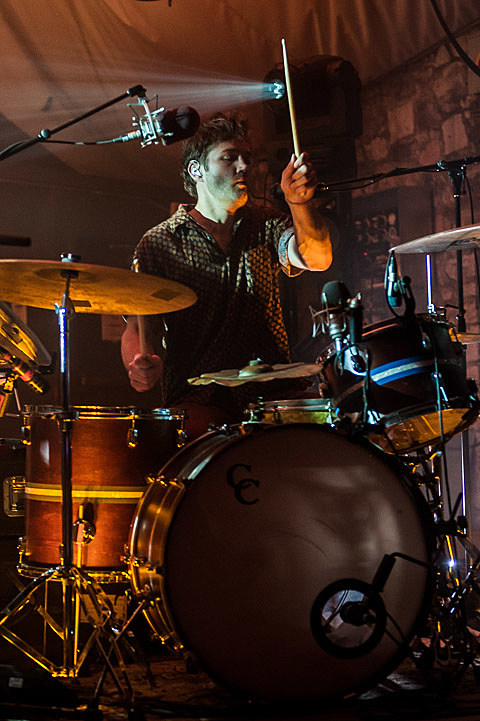 Here We Go Magic, Nightlands, Aaron Arntz/Benjamin Campbell/Christopher Bear @ Baby's All Right
In the midst of Luke Temple's ongoing residency at Union Pool, he'll be joining his band Here We Go Magic for a show at Baby's All Right. Openers are good too: Nightlands (aka War On Drugs/Sharon Van Etten collaborator Dave Hartley) and a trio set from Grizzly Bear drummer Christopher Bear, Aaron Arntz (who tours as live member with Grizzly Bear), and Benjamin Campbell (member of Joakim's live band and others). That trio also played last week's installment of Luke's Union Pool residency.

Matt Pryor (of The Get Up Kids), special guests @ The Grand Victory
Matt Pryor is fresh off a collaborative EP with his Get Up Kids bandmate James Dewees and a new rock-oriented solo album. While he's currently on the road supporting Max Bemis which hits NYC for a sold out show this Thursday, he'll stop in NYC for a much more intimate headlining show tonight. Special guests are promised, and you might hear some Get Up Kids songs.

Fred & Toody (of Dead Moon), Threats @ Mercury Lounge
Portland's Dead Moon, a band highly influential on the "Seattle Sound" of the early '90s, broke up back in '06, but two of its members Fred and Toody Cole (also of The Rats and Pierced Arrows) are out on an acoustic tour which hits NYC for two shows this week, this being the second.

Lupe Fiasco, Stalley, Mickey Factz, Boy Illinois, Kris Kasanova, Chris Cartier @ Irving Plaza
Lupe Fiasco plans to release his new album Tetsuo and Youth in early 2014 (so, in non-rap speak, basically whenever), but until then he'll be doing some shows, including four nights in the NYC-area this month.

Cyndi Lauper @ Highline Ballroom
Cyndi Lauper just did her holiday show at Beacon Theatre which included tons of big-name guests, and tonight she's on her own, continuing to celebrate the 30th anniversary of She's So Unusual for a TV taping. Sold out.

P!NK, The Hives @ Barclays Center
Opening for P!NK in an arena may not be your ideal way to see The Hives, but we'd be remiss not to mention that these highly entertaining Swedish rockers are in Brooklyn tonight.