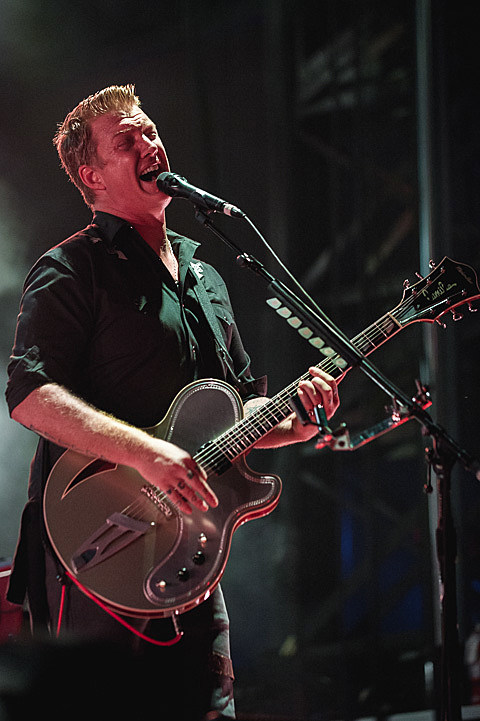 Queens of the Stone Age, The Kills @ Barclays Center
Queens of the Stone Age made quite the comeback this year with ...Like Clockwork, an album that reunited much of the Songs for the Deaf lineup and was packed with great songs. Tonight they return to NYC to take on the city's newest arena with excellent support coming from The Kills.

Yo La Tengo @ The Bell House
One of the many sad things about Maxwell's closing this year was that Yo La Tengo's annual Hannukah shows would no longer be happening. It's not quite the same but their four sold-out holiday shows at The Bell House will hopefully have some of the same spirit and surprises. This is Night 2.

Waxahatchee, Mutual Benefit @ Converse Rubber Tracks
It's the launch party for Pitchfork's new print quarterly, The Pitchfork Review, and they've got two of the year's breakout bands (who both achieved much P4K acclaim) for the occasion. There's the lyrically honest indie rock of Waxahatchee and the delicate chamber pop of Mutual Benefit.

Hess Is More, Psoy, Interzona @ Baby's All Right
Hess is More's most recent album, Creation Keeps the Devil Away, came out back in 2011. While good, it only hints at the live show which borders on DFA-style dancerock. Definitely worth checking out.

Lips, Fielded, Germans @ Glasslands
Originally from New Zealand, Stephanie Brown now lives in Brooklyn where she makes music under the name Lips. Tonight is a release party for her new EP where Lips' electro-soul style and smoky voice are still in fine form, with more assured, production than we've heard to date.

JD Samson & MEN, Tippy Toes, Colin Self @ Knitting Factory
The Julie Ruin isn't the only ex-Le Tigre band to put out an album this year. JD Samson's MEN returned with Labor and it's more of the kind of highly danceable stuff we've come to expect from them. This show was originally to be at Rough Trade but was moved do to their sound issues.

John Waters (A John Waters Christmas) @ Stage 48
The director and kitsch connoisseur will be sharing "some of his favorite holiday traditions, from his compulsive desire to give and receive perverted gifts to his religious fanaticism for Santa Claus and an unhealthy love of real-life holiday horror stories."

Tegan & Sara, Mary Lambert @ The Capitol Theatre
Tegan & Sara's Heartthrob was a major stylistic change towards more overtly pop music, and it's proved to be a favorite of many.

Regal Degal, Viva l'American Death Ray Music, Schmear @ Union Pool
Operating with drone, repetition and odd chord changes, Regal Degal are genuinely strange but very good at what they do. For some, pop music comes easy, for others it comes out like this. And that's a good thing. Viva l'American Death Ray Music are not quite as tilted but definitely operate on the fringes.

Hot Water Music, Torche, O'Brother @ Webster Hall
If you like big, bash-your-face-in rock, this double billing of Hot Water Music and Torche is not to miss. HWM reunited a few years back and secured their comeback with 2012's Exister, 13 more songs of their great, growly punk. Meanwhile, Torche continue to keep making sure the sludge metal world has its poppy side.

Tombs, Sannhet, Argonauts, Windfaerer, Barbarian @ ABC No Rio
It's an all ages matinee at ABC No Rio with some pretty excellent local metal, mostly on the atmospheric but still totally heavy side. Really strong bill.

Santacon
Oh, Santacon. You either hate it with every fibre of your being or you're currently wearing a puke-stained red suit right now. Actual snow should make things more interesting. For the rest of us, stay indoors if you can.