The Breeders at Pitchfork Festival 2013 (more by James Richards IV) 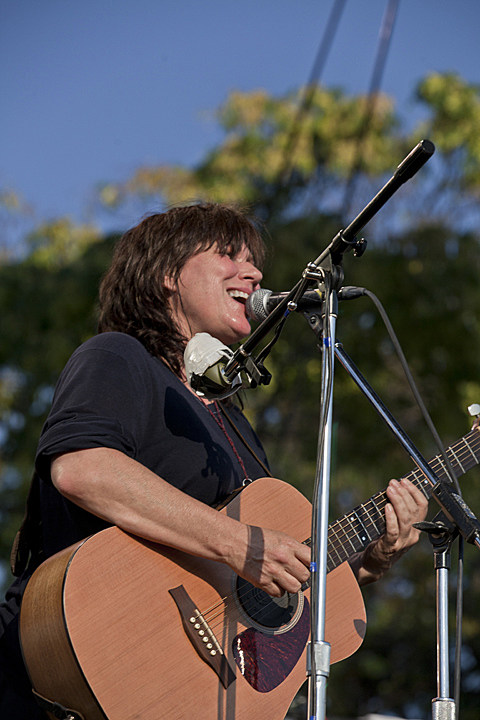 The Breeders, Speedy Ortiz @ Webster Hall
The lineup of The Breeders who gave us Last Splash have been touring that album for the better part of 2013. They're about to put the LP shows to rest, but have two more NYC shows tonight and Friday at Webster Hall, with openers and sonic descendents Speedy Ortiz.  For both, they're not just playing Last Splash in full, but also their debut, Pod. Tickets for both Webster Hall shows are still available.

BrooklynVegan & doNYC Holiday Party @ Videology
If you're not going to one the many shows happening tonight -- or wanna stop by before or after -- hit up BV and doNYC's Holiday Party tonight. We've got complimentary beverages courtesy Goose Island, weird Christmas clips on the big screen, and BV's Bill Pearis will be DJing. 8 - 10 PM and free, but you gotta RSVP.

Beyonce @ Barclays Center
Beyonce just came out of nowhere with a surprise new album which fit right in to a year that saw some of the biggest stars in pop music, like Kanye West and Justin Timberlake, making ambitious, forward-thinking music. It's been the talk of the internet, and maybe even of your real life, and with all this excitement it's great timing that she has two Barclays Center shows coming up. The first is tonight, and she does it again on Sunday. #Surfboard

Phosphorescent, Julianna Barwick @ Music Hall of Williamsburg
Phosphorescent is about to wrap up a great year that's seen a pretty significant increase in critical and fan love for the band with a four-night sold-out run at Music Hall of Williamsburg. This is the second night, and like the remaining two after this, it's a full band show (last night's was solo). Ambient pop musician Julianna Barwick, who opened last night's, opens tonights too and she's not to miss.

Their / They're / There, Mansions, Birthmark @ Knitting Factory
Their / They're / There is something of an emo/math rock supergroup which includes two of the genre's current leaders: Mike Kinsella (currently of Owen, previously of Cap'n Jazz, American Football, etc) and Evan Weiss (currently of Into It. Over It., previously of The Progress, Stay Ahead of the Weather, Up Up Down Down Left Right Left Right B A Start, etc). Plus, this lineup actually has two Kinsellas on the lineup -- Birthmark is the project of Mike's cousin Nate -- and the alt-rock-leaning Mansions are pretty good too.

Heaven's Gate, Chris Forsyth (and Solar Motel Band), Advaeta, Millions @ Trans-Pecos
While they often get tagged shoegaze (and there is a smidge of that in their sound), Heaven's Gate are more of punky rock band, while still using a lot of effects pedals. And they're really good.