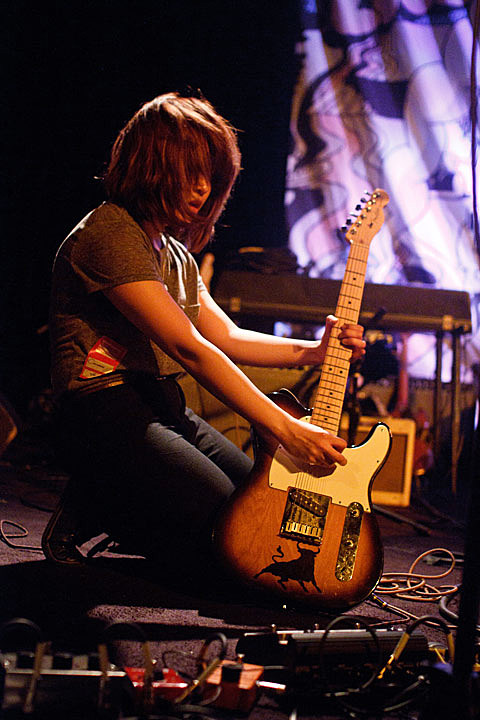 Gorguts, Origin, Nero Di Marte @ Saint Vitus
Death metal vets Gorguts returned earlier this year with Colored Sands, their first post-reunion album and first in general since 2001, and it's very deservedly ended up on tons of metal AOTY lists. It's been a hell of a year for them, and tonight's your chance to catch them one last time before the year ends. Sold out, but if you didn't already get tickets, there's always next year with Carcass.

Lightspeed Champion @ Cameo
Before he was Blood Orange, Dev Hynes was more of a folk troubadour type as Lightspeed Champion. Tonight he's dusting off that persona for this free, early, solo show at Cameo. 6 PM and you do need to RSVP.

Eternal Summers, Pre War @ Cake Shop
We are very excited to hear Eternal Summers' new album, The Drop Beneath, which is out March 4 via Kanine. They'll probably be playing more than a few of those new songs live tonight.

Oliver, Classixx @ Slake
While the West 30s club locale might not be the most ideal, if you have to be in a big club like this, you do have two appealing pop-friendly producers headlining.

Bobby Womack @ City Winery
R&B legend Bobby Womack, who released the terrific The Bravest Man In The Universe (produced in part by Damon Albarn) last year, is back in NYC for a three night stint at City Winery, this being night 2. Tickets are still available.

The So So Glos, California X, Palehound, Darlings @ Brooklyn Night Bazaar
Pretty strong lineup all around with the punky So So Glos, sludgy Amherst rockers California X, singer/songwriter-meets-noise-rocker Palehound, and the indie pop of Darlings. Like all Brooklyn Night Bazaar shows, the music is free, and there's shopping, food, and more fun too.

LVL UP, Julia Brown, High Pop, Alex G, Pill Friends @ Silent Barn
The Birdtapes label celebrates its 1-year anniversary with this show that has a good lineup of indie rock bands on the label and/or friends of the label.

Martin Rev, Child Abuse, Netherlands, Forma @ Bowery Electric
When he's not making noise with his veteran synthpunk duo Suicide, Martin Rev is a solo artist who has been pretty active again this year. All great (and equally noisy) openers too.

Cro-Mags, Meyhem Lauren, Danny Diablo & The NYHC Allstars, Block McCloud, Wisdom In Chains & more @ Santos
NYC crossover thrash vets Cro-Mags may have had some trouble in recent history, but they're still kicking and will grace their hometown with another show tonight. Their set is part of Diablo Fest which includes a ton of performers like local rapper Meyhem Lauren.

Yo Gabba Gabba! @ Beacon Theatre
Yo Gabba Gabba! Live!, the touring version of the Nick Jr. show that is known to feature indie/alternative music, returns to Beacon Theatre for six holiday shows this weekend. Three of them are tonight, and the remaining two are tomorrow.

Brand New, The Front Bottoms @ Starland Ballroom
Brand New do the second half of their discography tonight (they did the first half in Long Island last night), and if you're one of the lucky ones with those hard-to-get tickets, don't miss showing up for The Front Bottoms.

Dillon Francis, Cashmere Cat, Anamanaguchi @ Terminal 5
This should be a pretty fun show all around, with Dillon Francis, whose song "Without You" with Totally Enormous Extinct Dinosaurs was a pretty big hit in the dance world this year, plus fast-rising producer Cashmere Cat, and chiptune rockers Anamanaguchi. It's sold out and the same lineup does it again tomorrow (also sold out).