Swearin' at House of Vans in August (more by David Andrako) 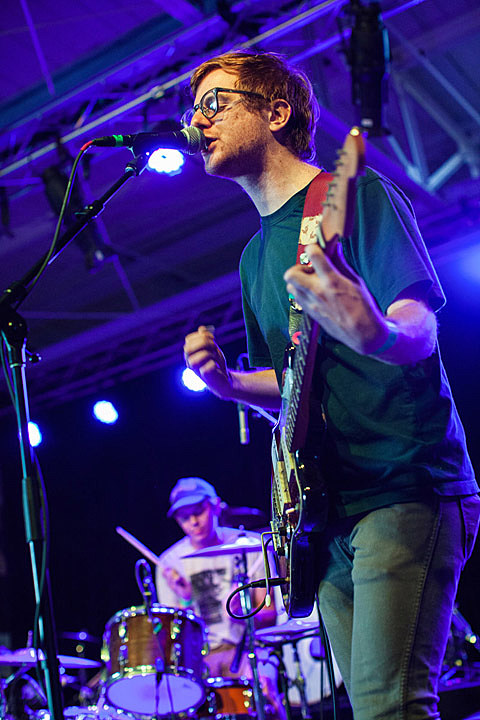 Swearin', Cymbals Eat Guitars, Porcelain Raft, Low Fat Getting High @ Brooklyn Night Bazaar
Swearin's new album (one of my favorites of 2013) combines Weezer power pop, Dinosaur Jr riffage, and other excellent elements of '90s rock without ever feeling like its rehashing 20-year-old ideas. Tonight they're with fellow '90s lovers Cymbals Eat Guitars and Low Fat Getting High, plus Porcelain Raft who aren't really likeminded but still enjoyable. This one's free and hard to pass up. - Andrew

UPDATE: Due to weather, Swearin' have dropped off the Brooklyn Night Bazaar show. The show is still on with the other three bands.

Yvette, Christines, Future Punx @ Glasslands
A solid bill for those with post-punk proclivities: Yvette mine goth/industrial; Christines (new band from Andy of Woven Bones) skew shoegaze; and Future Punx will scratch your manic new wave itch. UPDATE: DUE TO WEATHER POSTPONED TILL 2/21.

Rockie Fresh, Casey Veggies @ Baby's All Right
LA rapper Casey Veggies and Chicago rapper Rockie Fresh just released the free collaborative mixtape Fresh Veggies, and they're doing a few free shows together this month to celebrate. You had to RSVP to get in.

Egyptrixx, Sinden, Judge Wise @ Glasslands
Egyptrixx's new album is atmospheric and spacey electronic music, and it should sound pretty great when he makes the NYC debut of his new A/V show tonight. UPDATE: This show is postponed, new date TBA.

UPDATE 2: Egyptrixx will be DJing Cameo tonight instead.

Black Cobra, Meek Is Murder, Blackout, Throaat @ Saint Vitus
LA metal band Black Cobra are a duo but they have no trouble sounding as full as their many-membered contemporaries. Like we said, "they rumble like High on Fire and zig-zag like Converge without missing a beat." There's good local support tonight too, especially including rapid-fast technical hardcore band Meek Is Murder.

The Brooklyn What, No One & the Somebodies, The Everymen, Eleanor, The Donner Party Picnic, Highway Gimps @ The Gutter
The music of Lou Reed will be paid tribute to at this show, with proceeds going to The Ali Forney Center which provides shelter for homeless LGBTQ youth.