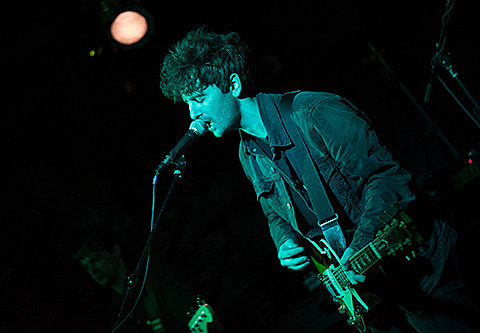 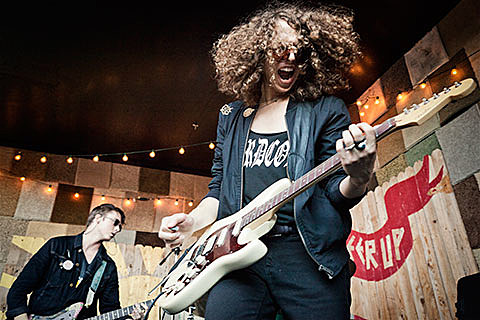 Weekend, Nothing, Vaura @ Bowery Ballroom
Do you like your shoegaze heavy and very loud? Tonight show should leave your ears ringing (in a good way?) with the gothy sounds of Weekend and the just plain heavy blast of Nothing.

Destruction Unit, Crystalline Roses, Cottaging (mems Ukiah Drag), Ancient Ocean, DJS Ning Nong and WeGlo @ Saint Vitus
Arizona psych punks Destruction Unit are one of the loudest, most intense, and unforgettable under-the-radar live bands in the country right now. If you've seen them, you know what you're in for, but if you haven't and are looking for spontaneous plans tonight, this show cannot be recommended enough.

Mac DeMarco, Delicate Steve, Hunters @ Brooklyn Night Bazaar
The folks at Panache Booking are behind this weekend's shows at BNB, and they've put together two good line-ups. Tonight it's a solo set from Mac Demarco, plus the instrumental magic of Delicate Steve and the always-entertaining Hunters. Free.

Connan Mockasin, ARP @ Glasslands
Australian eccentric Connan Mockasin just released his new album, Caramel, and is here for his first proper North American tour. This is his second of two NYC dates (Mercury Lounge was last night) and is sold out.

Sepalcure, Alex Burkat, Aquarian @ Cameo
When producers Machinedrum and Braille aren't making excellent forward-thinking electronic music on they're own, they're making it together as Sepalcure. The duo haven't played in a while, so tonight should be a real treat.

Self @ Gramercy Theatre
'90s rockers Self are celebrating their 1995 album, Subliminal Plastic Motives, which just got reissued by Fat Possum. This is their first show in nearly 10 years.

Neil Young @ Carnegie Hall
Neil Young did the Crazy Horse thing for much of 2012 and 2013, playing some excellent, noisy shows, and tonight he concludes his four-night run at Carnegie Hall, showing off his prettier side.

Meth Dad, Chiffon, Fielded, D. Cookin @ Death by Audio
Nashville electronic pop weirdo Meth Dad is currently on a tour with Chiffon which comes to NYC for two shows this week, this being the second. Dark pop artist Fielded is more than enough of a reason on her own to go to this show too.

Action Bronson @ Irving Plaza
The insanely prolific and always great NYC rapper Action Bronson deservedly continues to get bigger, and this week he'll show that off with two big sold-out hometown shows. This is the first.

Mother Falcon, And the Kids @ Littlefield
Many-membered Austin chamber pop collective Mother Falcon are back in NYC this weekend for Winter Jazz Fest, which they play tomorrow, but before that they'll headline this show at Littlefield tonight.

Porches, My Dad, Gunk, Flagland @ Silent Barn
One of many chances to catch NYC "bummer pop" band Porches in their hometown, plus their Exploding In Sound labelmates My Dad, who are in from Chicago.

Against Me!, The Sidekicks, The Shondes @ The Stone Pony
Against Me!'s upcoming LP, Transgender Dysphoria Blues, their first since singer Laura Jane Grace came out as transgender, is shaping up to be one of the more interesting and anticipated releases of early 2014. If you missed them at MHOW last night, need to see them again, or this show is just more convenient for you, they're in NJ at The Stone Pony tonight. Similarly anthemic openers The Sidekicks and The Shondes are not to miss either.

Joe Pernice @ Rockwood Music Hall
Wesley Stace was just on tour with Pernice, who plays solo at Rockwood Music Hall tonight. He's a talented songwriter possessed with a honeyed voice not unlike The Zombies' Colin Blunstone, and is a funny banterer to boot.

The Blind Boys of Alabama, Allen Toussaint, Ruthie Foster, Paul Thorn @ BB King's
This show, as part of the APAP conference, features some great artists like influential New Orleans pianist Allen Toussaint and legendary gospel group The Blind Boys of Alabama (who got an increased presence in the indie world this year thanks to their new Justin Vernon-produced album).

Jake Bugg, Albert Hammond Jr., The Skins @ Terminal 5
He's not even 19 yet, but UK singer Jake Bugg already counts guys like Noel Gallagher and Paul Weller as fans... and sold out Terminal 5.