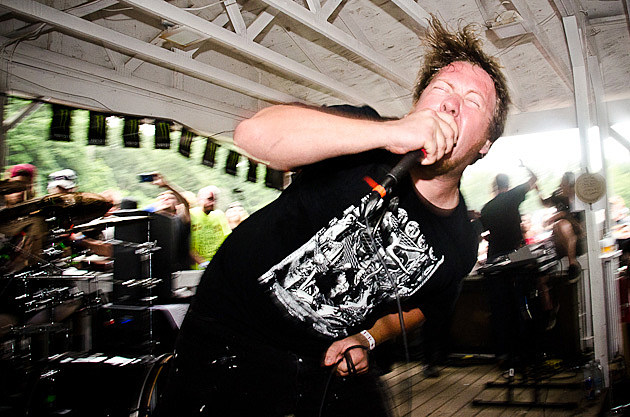 Versus at Chickfactor 20 (more by Dominick Mastrangelo) 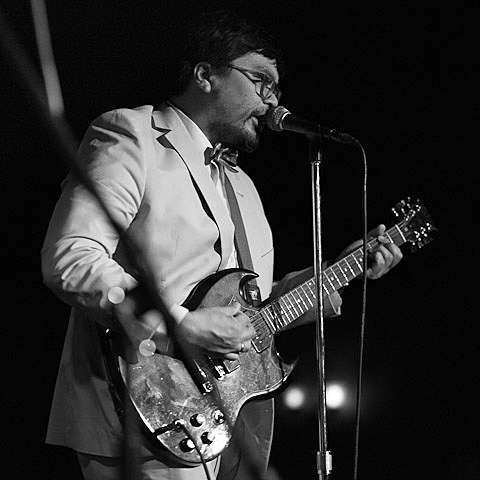 Pig Destroyer, Dysrhythmia, Trenchgrinder, Mother Brain @ Saint Vitus
Pig Destroyer fully deserve their reputation as modern grindcore's most vital band; this show will mark their first NYC appearance with new (and first-ever!) bassist Scott Jarvis in the lineup. They're headlining tonight's BV/Invisible Oranges-curated Red Bull Sound Select show which is an all-around killer bill. If you RSVP'd, it's $3 at the door, if not it's $10. First-come, first-served. Doors are at 6 PM. Get there early. Oh, and Dave Hill is hosting too!

Versus, pow wow!, Crazy Pills, Quiet Loudly, The Planes, Let's Be Loveless @ Shea Stadium
This is a benefit for the Philippines which is still recovering from devastating Typhoon Haiyan. Most of the bands on this bill have some ties to the country, and this is Versus' first local show in a long while.

Lee Ranaldo and The Dust, Steve Gunn, Spectre Folk @ The Bell House
With Sonic Youth behind him, Lee Ranaldo (and his SY bandmate Steve Shelley) have moved into poppier territories with their new project, which can recall everything from melodic indie rock to '70s art rock. Tonight's openers are both good too: Steve Gunn of Kurt Vile's band and Spectre Folk who also count Steve Shelley as a member.

Laurel Halo, Autre Ne Veut, Maxmillion Dunbar, Ital, Bookworms, Special Guests @ 285 Kent
Brooklyn DIY venue 285 Kent is sadly closing, but before it's done for good, there's four more epic shows going down in the Williamsburg space this month. Tonight's the first of those, leaning mostly towards electronic music and R&B. Any guesses on who the special guests will be?

Action Bronson @ Irving Plaza
The insanely prolific and always great NYC rapper Action Bronson deservedly continues to get bigger, and this week he'll show that off with two big sold-out hometown shows. This is the second.

Omar-S, FIT, DKDS @ 88 Palace
Omar-S had one of the better (but often overlooked) house records of 2013 with Thank You For Letting Me Be Myself, an album that eschewed the big hooks of some of the other big house albums of 2013 but focused on masterful production.

Cloud Control, Avers @ Baby's All Right
Australian guitar pop combo Cloud Control have foolishly left the part of the world where it's summer right now to experience the polar vortex and to play some of their catchy anthemic pop for the cold people of NYC.

Golden Suits, Inlets @ Union Hall
Fred Nicolaus is one half of Department of Eagles (the other half being Grizzly Bear's Daniel Rossen) and on his own he makes similarly quirky folk-pop as Golden Suits.

Rahaan, Free Magic, Faso @ Glasslands
Chicago's Rahaan comes to NYC for tonight's DISCOVERY party. According to his bio, he "has been dropping disco and funky house beats to retro music heads since the 80's when he and his friends use to dance at the best house parties in Chicago - Rahaan's home state and most importantly, the place which gave birth to House music."

The Impressions featuring members of the Dap-Kings, Naomi Shelton & The Gospel Queens, The Inspirational Voices of the Abyssinian Baptist Church @ Plymouth Church
Tonight Plymouth Church (57 Orange St in Brooklyn Heights) hosts a benefit concert for Free the Slaves, which "works on the ground with liberators around the world doing what it takes to free men, women and children and help them stay free." It's a great lineup (for a great cause) including Chicago soul legends The Impressions, who will be joined by members of Sharon Jones' band The Dap-Kings, and The Dap-Kings' Daptone labelmates Naomi Shelton & The Gospel Queens.

Love Supreme, Truthers, Future Punx, Kissing is a Crime @ Cheap Storage
Garagey soul act Love Supreme headline this party which has been dubbed the "New Year's Eve Do-Over." This time maybe not so many mezcal shots. As for the rest of the line-up, we like jittery new wave lovers Future Punx, especially.