Kaki King at Mercury Lounge in 2013 (more by Amanda Hatfield) 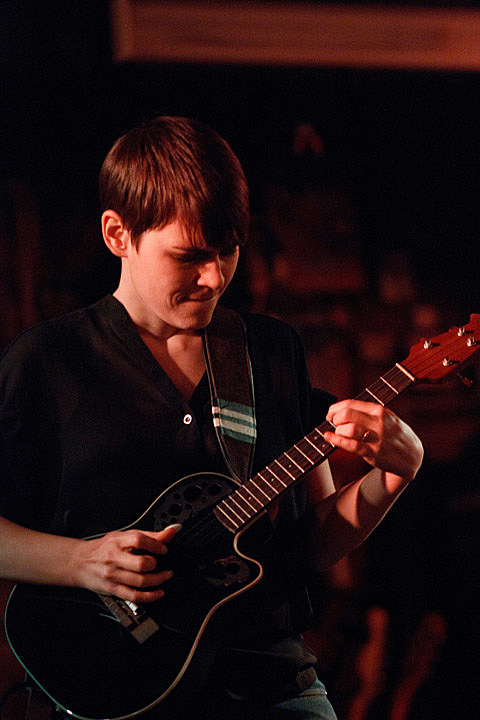 Neutral Milk Hotel, Elf Power @ BAM
After releasing one of the most classic indie albums of all time with In the Aeroplane Over the Sea, Neutral Milk Hotel pretty much disappeared with frontman Jeff Mangum choosing to remain mostly out of the public eye. A few years ago, Mangum began touring again, but it wasn't until late 2013 that Neutral Milk Hotel returned to the road. Their reunion tour finally comes to NYC this week and this is the first of five shows here.

Waxahatchee, All Dogs, Cayetana @ Glasslands
It's an incredible triple bill at Glasslands tonight with Waxahatchee, whose singer-songwriter-ish tunes made up one of our favorite albums of 2013 and likeminded (but a bit punkier) indie rock from All Dogs and Cayetana. This is their second of two NYC shows this week, sold out.

The Rural Alberta Avantage, Grey Lands @ Mercury Lounge (early and late)
Canada's folky indie rockers The Rural Alberta Advantage are back in NYC for three shows this week, tonight's being the third and second.

Nick Waterhouse @ Milk Gallery
RSVPs for this show, part of the "Toyota Sessions," are already at capacity but Nick will be back in February.

Pizza Underground @ Moscot
McCauley Culkin's slice-friendly Velvet Underground tribute act plays a free -- but RSVP'd out -- show at this eyewear shop. (They play Brooklyn Night Bazaar on Friday.) Enjoy it while it's hot -- it cools in 15 minutes.

Nadastrom, Sabo, Schlachthofbronx @ Output
For this week's INPUT party at Output, Moombahton OG Nadastrom comes to Brooklyn and his massive beats should keep the dancefloor moving all night.

Lo-Fang @ The Standard, East Village
The 4AD-signed Lo-Fang makes art pop that mixes electronic and acoustic instruments, and though he's about to play some pretty big stages opening for Lorde, tonight you can catch him on his own in a smaller room.

The Crystal Method @ Cielo
They were tagged as "America's Chemical Brothers," the Las Vegas duo are still partying like it's 1998 on their new self-titled album.

The Dictators NYC, Threats & the Bullys @ The Bowery Electric
NYC punk pioneers The Dictators covered "California Sun" two years before the Ramones ever did, but that's not all they're known for; their original material lives up as well. This is Handsome Dick Manitoba's current incarnation of the band and tonight they celebrate "sixty years of Handsome Dick Mantitoba."

Ty Dolla $ign (host), DJ Spynfo, DJ Magic, DJ Yo @ Webster Hall
Buzzy LA rapper Ty Dolla $ign was in town last night for an actual show at SOB's, and though he's only hosting this one, it could still turn into a pretty good time.