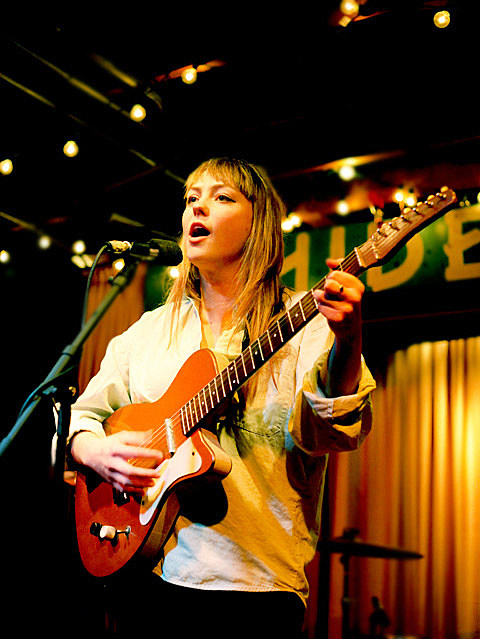 Angel Olsen, Cian Nugent, Jaye Bartell @ LPR
Angel Olsen's new album, Burn Fire For No Witness, brilliantly combines the loner folk of its predecessor with a newfound knack for indie rock. It's a great album, and tonight's sold out show should be a good one. If you're going, get there early for avant guitarist Cian Nugent.

Sondre Lerche, Gambles @ Baby's All Right
Splitting his time between Norway and Brooklyn, Sondre Lerche is a charmer whether playing solo or with a backing band. With a new album out sometime soon, we'll hopefully get some fresh tunes tonight.

Bluffing, Stolen Girls, Dead Tenants, Dan Francia @ Living Gallery
Bluffing's debut album, due out next month, is full of the sort of guitar-oriented lo-fi pop that dominated much of indie rock's early days. You can check out the band's brand new video for "Mind/Mood" below.

Russian Circles, KEN mode, Inter Arma @ Bowery Ballroom
This is one hell of a triple bill for metal (with some non-metal crossover), including the heavy post-rockers Russian Circles, ferocious post-hardcore rippers KEN mode, and the psychedelic black metallers Inter Arma. They do it again on Saturday at Saint Vitus, both sold out.

Earl Sweatshirt, Ratking @ Webster Hall
If you're like, totally over Odd Future, there's a chance that Earl Sweatshirt is the one rapper in the crew you still have some faith in. If that's the case, lucky for you he comes to NYC for two shows this week. Both sold out though.

Ovlov (acoustic), Palehound, Infinity Girl, What Moon Things, July Talk @ Pianos
This is the first of two Palehound shows at Pianos this month, the next being next Thursday (2/27). In between the two shows, Palehound releases her first 7" recorded with the full band she plays live with, and the fuller sound suits her well. Check out the new track from that 7", "Pay No Mind," below.

Calves, Le Rug, The Dirty Nil, Weird Womb, Phone Home @ Shea Stadium
A lot of solid bands on this bill, but the one we think you should definitely catch is The Dirty Nil, who are bringing their abrasive, melodic punk over from Canada for this one.

RJD2, Tanya Morgan @ Brooklyn Bowl
RJD2 has been making excellent beats for the Def Jux/Rhymesayers world of hip hop for about two decades now. Tonight should be a cool show, as he's performing with a live band and also doing a DJ set. Brooklyn hip hop duo Tanya Morgan are worth catching too.

Noveller, Bad Braids, Gem Trails, Sea Camp @ Silent Barn
It was just announced that atmospheric guitar great Noveller will open a bunch of the dates on St. Vincent's upcoming tour. You won't get to see her at St. Vincent's NYC show (Holly Herndon opens that one), but you can catch before she leaves for the road at Silent Barn tonight.

Raccoon Fighter, The Teen Age, The Fleeting Ends, Whiskey Bitches @ Cake Shop
NYC doesn't really do garage rock so much (we leave that to places that people have actual garages) but Raccoon Fighter are fighting the good fight (against racoons?), making quality fuzzed out pop. The Teen Age make superior scrappy pop too.

Digitalism, Etnik @ Output
German electro duo Digitalism have said that they aren't going to be playing much live this year, so catch them tonight while you can. Stream their new single "Fahrenheit 32" below.

oOoOO, Tempers, Vandana Jain @ Glasslands
Witch house may not be the hottest trend anymore, but oOoOO is still proof that the genre birthed some solid artists. The gothy Tempers (who do a great Swans cover) aren't to miss either.

Cam'ron @ Stage 48
Cam'ron just announced a Terminal 5 show with A-Trak, which sounds like it'll be a lot of fun, but if you can't wait that long to see Killa Cam, head to Stage 48 tonight.

Radkey, Your Skull My Closet @ Mercury Lounge
Radkey love the sounds of late '70s and early '80s punk rock, and though they polish it up a bit more than those bands did, they still like to rock out.

Junior Astronomers, Ex-Wife, Wild Rice, The Doubts @ Muchmore's
NJ's Ex-Wife make some pretty driving post-punk, and tonight they return to NYC with their NJ pals Wild Rice, who they've played NYC with before.

Glasvegas @ Knitting Factory
Though the hype surrounding the band's debut has died in the years since, Scotland's Glasvegas are still making highly-charged anthemic guitar pop on their third LP, Later...When the TV Turns to Static. This is their second of two NYC shows (originally supposed to happen at Rough Trade) and it's sold out.