Porches at Baby's All Right in January (more by Amanda Hatfield) 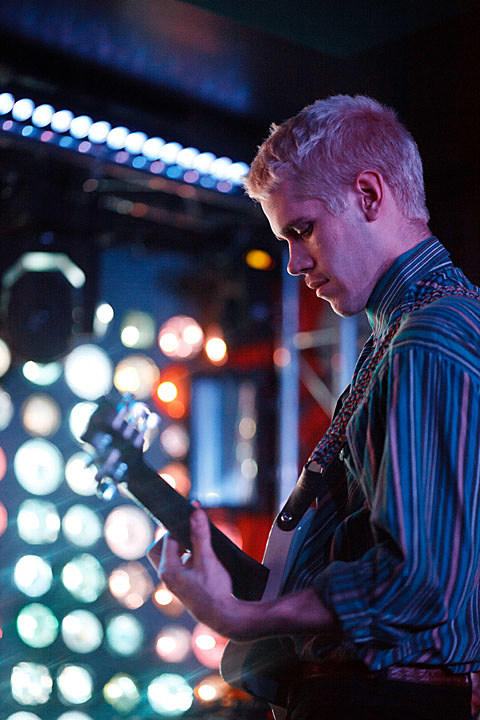 Porches, Downies, Little Big League @ Shea Stadium
There's never a lack of Porches shows in NYC, but tonight they play their last one here for at least a few weeks, because they'll be beginning their tour tomorrow. Making it an even better show, Philly's mathy, punky indie rockers Little Big League are on the bill too.

John Hodgman @ Union Hall
You may know John Hodgman as a Daily Show correspondent, but he's also got tons of his own material. Tonight's another of his Secret Society shows at Union Hall.

Ice Balloons, Kyp Malone, Rob Bryn @ Death By Audio
When Kyp Malone makes music outside of TV on the Radio, it tends to lean towards the experimental side of things -- like with Ice Balloons his avant garde psych-noise band with Rob Bryn of Wild Yaks. Both Malone and Bryn will do solo sets as well.

Julio Bashmore, Huxley @ Output
Julio Bashmore, who you may know best for the production he's done for Jessie Ware, also makes thumping house beats in his own time, and he'll finally be getting his debut solo LP out this summer. Meanwhile, catch the UK producer in NYC tonight.

Justin Vivian Bond @ Joe's Pub
A regular in NYC's drag scene for years, and once a member of the duo Kiki and Herb (with Kenny Mellman, who is now in The Julie Ruin), Justin Vivian Bond kicks off his new show, The Drift, at Joe's Pub tonight. The show "creates a new, free associative, collage of spoken word and song inspired by the story of Karen Stone, a retired actress who drifts from one space to another -either in her mind, in couture or in bed." He does it again on 3/14, 3/27, 3/28, 4/10 & 4/11.

Most of BrooklynVegan is in Austin this week for SXSW. Follow our exploits via @BVSXSW on Twitter. If you're in Austin, come say hi at one of our many day parties at Red 7.