California X at DbA in 2013 (more by Vladislav Grach) 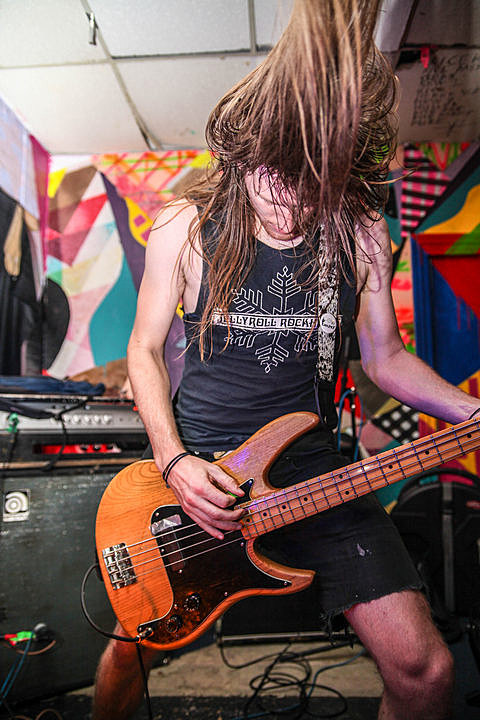 California X, Sleepies, LVL UP, Washer @ Shea Stadium
This is a great bill all around, with Amherst's sludgy California X, Brooklyn's punky Sleepies, the Built to Spill-esque indie rock of LVL UP, and lo-fi rockers Washer.

Alan Licht & Brian Chase, Mary Halvorson & Joe Morris @ Issue Project Room
Alan Licht is the guitarist in Lee Ranaldo and the Dust, and Brian Chase is the drummer of Yeah Yeah Yeahs, but when they're not playing with their main projects, they also make experimental music together. Their collaborations have resulted in the debut album, We Thought We Could Do Anything, which they celebrate at IPR tonight.

Guards, The Dig, Modern Rivals, Grassfight @ Brooklyn Night Bazaar
Guards, whose frontman Richie Follin is the brother of Cults singer Madeline (and a former member of that band), make indie pop as accessible as Richie's sister's band, but more driving and anthemic. Like all BK Bazaar shows, entry is free tonight, and there's also not-free food, drinks, shopping, and games.

DRI, Mucky Pup, Sh*tkill, Morder, Apathy @ The Studio at Webster Hall
Crossover thrash vets DRI and Mucky Pup are no strangers to playing shows together, and they'll do so again tonight, which was rescheduled from November.

Justin Vivian Bond @ Joe's Pub
A regular in NYC's drag scene for years, and once a member of the duo Kiki and Herb (with Kenny Mellman, who is now in The Julie Ruin), Justin Vivian Bond continues his show, The Drift, at Joe's Pub tonight. The show "creates a new, free associative, collage of spoken word and song inspired by the story of Karen Stone, a retired actress who drifts from one space to another -either in her mind, in couture or in bed." He does it again on 3/27, 3/28, 4/10 & 4/11.

Most of BrooklynVegan is in Austin this week for SXSW. Follow our exploits via @BVSXSW on Twitter. If you're in Austin, come say hi at one of our many day parties at Red 7.