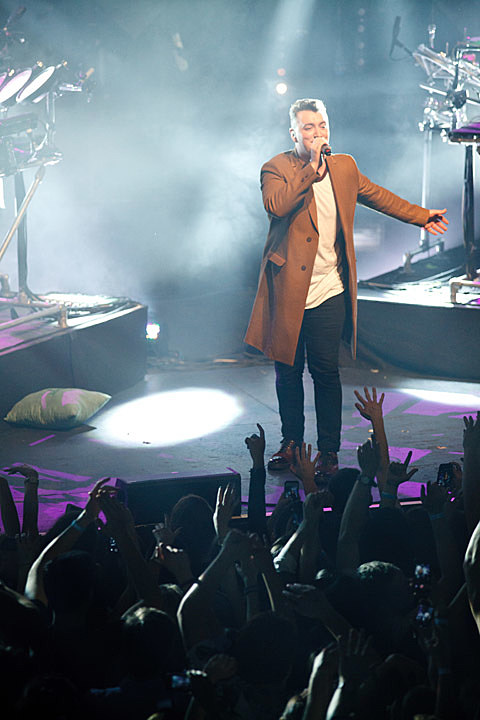 Sam Smith @ Webster Hall
It wasn't that long ago that Sam Smith wasn't known as much more than the singer on Disclosure's "Latch," but from the impressive solo tracks he's been releasing ahead of his debut album (due out in May), he's shaping up to be an exciting artist on his own too. Tonight's show is sold out.

Boogarins @ Other Music
Brazilian band Boogarins' debut album came out via Other Music Recording Company and the band play a free in-store at OM's NYC store tonight ahead of their Glasslands show on Tuesday.

Solids, PUP, Pachangacha @ Glasslands
It's a triple attack of punky indie rock at Glasslands tonight with Solids and PUP stopping in NYC on their way back to Canada after SXSW, and Connecticut's Pachangacha joining them too. All three bands do it again tomorrow at Mercury Lounge.

Bob Dylan in the 80s w/ John & Ian of Deer Tick, Langhorne Slim, Elvis Perkins, Spirit Family Reunion, Dawn Landes & more @ MHOW
Bob Dylan's 1980-1990 period is being honored with a tribute album on ATO Records this week, and to celebrate that there's a release show at MHOW with many of the artists contributing to the album (plus one who isn't), including Langhorne Slim, John & Ian of Deer Tick, Elvis Perkins, Spirit Family Reunion, Dawn Landes, Yellowbirds, Hannah Cohen, members of Tea Leaf Green, and special guests,

Tinariwen, The Melodic @ Brooklyn Bowl
Malian band Tinariwen bring their exotic sounds to Brooklyn Bowl for the second of two nights there tonight.

La Femme @ The Standard East Village
If you missed the Parisians at Glasslands last night and can't make their shows opening for Trail of Dead, they play tonight at The Standard (early show 7 - 9 PM). It's free but you do need to RSVP to aohayon@standardhotel.com.

RAC, Prides, SPEAK @ Rough Trade
RAC, who work with many artists including Bloc Party's Kele, kick off a 2-night run in NYC tonight. Tonight's show is sold out, but tomorrow's larger Webster Hall show is still on sale.

Mike Birbiglia @ Union Hall
The very funny Mike Birbiglia is about to take his "Thank God for Jokes" set on tour, which doesn't include any dates in NYC, but before he leaves he'll do another of his small "Working It Out" shows tonight.

Ask Me Another w/ Andrew WK @ The Bell House
This is a live taping of WNYC's podcast, "a rambunctious hour that blends brainteasers and local pub trivia night with comedy and music" featuring host Ophira Eisenberg and special guest Andrew WK.