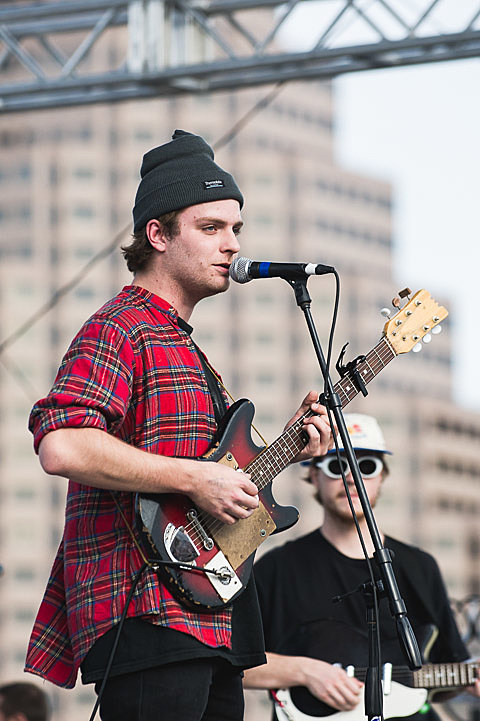 Mac DeMarco @ Other Music
Get a sneak peak at Mac's new album, Salad Days, at this free acoustic in-store ahead of his two proper headlining shows. UPDATE: To attend, you had to pre-order the album through Other Music, and the venue is now at capacity.

The World is a Beautiful Place & I Am No Longer Afraid to Die, The Hotelier, Crying, Told Slant @ Suburbia
Brooklyn DIY spot Suburbia hosts an excellent double dose of emo tonight with multi-layered Connecticut collective TWIABP and Worcester, MA's emo/pop punk/post-hardcore blenders THe Hotelier. Local support comes from chiptune band Crying and bedroom indie rockers Told Slant. Suburbia is pretty tiny, so this is sure to be a pretty wild show.

Typhoon, Lady Lamb The Beekeeper, Wild Ones @ Webster Hall
This is a pretty good triple bill with art pop ensemble Typhoon, the folky Lady Lamb the Beekeeper, and Typhoon's Portland neighbors Wild Ones.

Allah-Las, Spires, The Black Hollies @ Rough Trade
Los Angeles band Allah-Las look and sound like they're from 1966, making sweet 12-string jangly pop. This is a rescheduled show from December and a one-off for the band.

Rakim @ SOB's
Rakim still plays his hometown a good amount, and tonight's another good opportunity to catch the legendary rapper.

JD Samson & MEN @ The Jewish Museum
The Jewish Museum's Wind Up series continues tonight with a live set from ex-Le Tigre member JD Samson's band MEN. There will also be "interactive art making activities, tours of the new exhibition Other Primary Structures, and an open bar with beer and wine."

The So So Glos, Heeney, Pictureplane DJ set, Tony Quattro DJ set, Nick Gazin DJ set @ The Flat
Mishka is celebrating the 5-year anniversary of its flagship store (350 Broadway in Brooklyn) tonight with an in-store reception from 7 to 10 PM, and after that there's an afterparty at The Flat with local rock bands The So So Glos and Heeney, plus numerous DJs.

Joe Mande, Wyatt Cenac, Max Silvestri @ The Bell House
The very funny Joe Mande left NYC to live in LA a few years ago, but tonight he'll be back on his #BITCHFACE tour, and solid support comes from current NYC residents Wyatt Cenac and Max Silvestri.