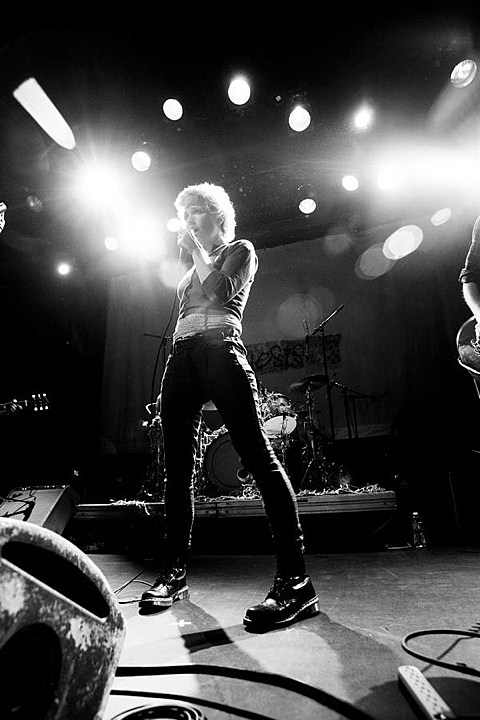 Priests, Downtown Boys, 1/2 of Swearin', Olga Bell @ MoMA PS1
DC punks Priests have a new album coming out on Don Giovanni (they just released the killer lead single), and many upcoming tour dates, three of which are in NYC. Today's show is a little different than the other two though. It's an afternoon show (3 PM start) "of discussion and music surrounding feminist punk rock with artists" as part of MoMA PS1's Sunday Sessions, and also includes fellow punk band Downtown Boys, 1/2 of Swearin' (Allison Crutchfield and Kyle Gilbride) and Dirty Projector Olga Bell. The artists will be in conversation with Pitchfork's Jenn Pelly.

Vaz, Anwar Sadat, Guardian Alien, The Library Is On Fire @ Death By Audio
Louisville's Anwar Sadat make fast, angry post-punk that doesn't feel weird being compared to The Jesus Lizard or Big Black. Tonight's their second of two NYC shows this weekend, and really the whole bill is killer with noise crew Vaz, Guardian Alien (aka the insane drumming of ex-Liturgy skinsman Greg Fox plus lots of noise) and shoegazy punks The Library Is On Fire.

Antibalas, LP, Angelique Kidjo, John Doe & guests @ City Winery
City Winery founder Michael Dorf presents a Paul Simon tribute show at Carnegie Hall tomorrow, but at his own venue tonight there will be a live rehearsal show of Simon's music with the above-mentioned artists and other special guests.

Hannibal Buress, Michael Che, Bridget Everett, Kurt Metzger, DJ Roofeeo & "a VERY special musical guest" @ Knitting Factory Brooklyn
Hannibal Buress' birthday may be February 4, but he's choosing March 30 as the day of his birthday celebration at Knitting Factory, where he performs for every Sunday. A bunch of his friends are announced for this one, but what isn't announced is the "VERY special musical guest." Who could it be? Usually his shows are in the front room, but this time he takes over the main room, and its sold out.