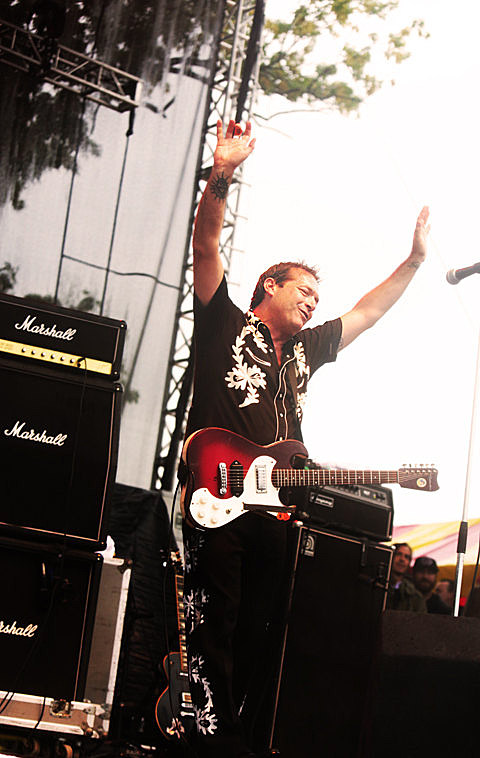 Rocket from the Crypt, Ex Hex @ Bowery Ballroom
Rocket From the Crypt is one of the great John Reis' many bands (also of Drive Like Jehu, Hot Snakes, Sultans, Night Marchers, etc), and their mix of '90s punk and horn-filled rock 'n' roll swagger resulted in a handful of great records before their breakup in the mid 2000s. Now they're back on a reunion tour, and tonight's their first of two sold-out NYC shows this week. And it's a hell of a double bill with Mary TImony's (WIld Flag, Helium, Autoclave) glammy rock trio Ex Hex, who are opening and not to be missed.

Leverage Models, Zula, Trabajo, Salt Cathedral, Isn't Ours, Human Resources @ Shea Stadium
If you love Big '80s music like The Associates, ABC, and (early) Spandau Ballet, you will probably dig the widescreen sounds of Leverage Models who have a firm grasp on that, right down to the saxaphone and syn-toms.

Flavor Flav and the Flavortronz @ Iridium
Public Enemy's Flavor Flav fronts a new band called the FlavorTronZ, who "cover hit songs from the '70s thru the '90s [...] from such greats like Wild Cherry, Sly & The Family Stone, Elton John, Led Zeppelin, The Gap Band and many others." You can't make this stuff up, and if you need to see it to believe it, you can do so at the Iridium twice tonight (8:30 PM & 10:30 PM).

The Pack A.D., Dinowalrus @ Mercury Lounge
Vancouver's The Pack A.D. do the guitar-drums duo thing but manage to not sound like any of the other bands with a similar configuration. Opening are chameleon-like Brooklynites Dinowalrus who seem to molt off their previous sound every season.

Art Garfunkel @ Bergen PAC
Maybe Simon wrote the songs, but Garfunkel's voice was a key part of that legendary duo's sound too, and you can catch him on his own at 3 NYC-area shows this week, this being the first.