Holy Ghost! at Terminal 5 in 2010 (more by Vincent Cornelli) 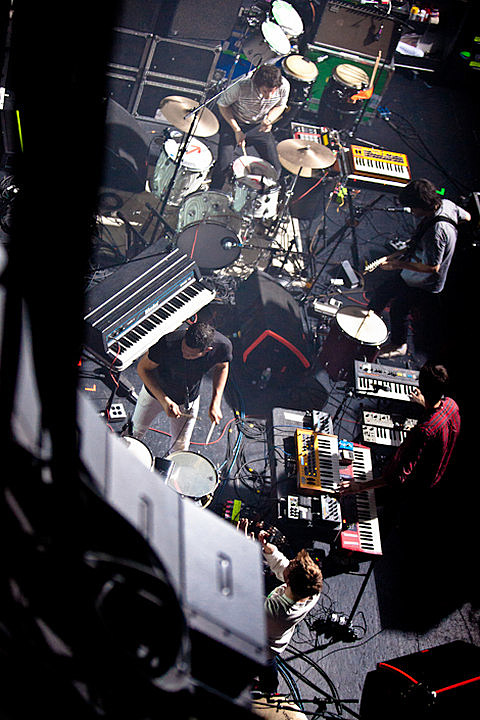 Perfect Pussy, Sarongs, Friendless Bummer @ Death by Audio
Perfect Pussy's solid debut album is out now, but it's really all about the live show where this intense noise punk band really shines. This is their first of two sold out NYC shows this weekend, and considering the location (smaller, DIY, all ages), tonight's will likely be the rowdier one.

Holy Ghost!, That Work (DJ) @ Webster Hall
As a warm up to Coachella, DFA mainstays Holy Ghost! are playing two NYC shows. Tonight's at Webster Hall and tomorrow (4/5) it's a a sold-out show at Baby's All Right.

DIIV, Nothing, Lofts @ Glasslands
It's a great double bill at Glasslands tonight with the heavy shoegaze of Nothing that's even heavier live than on record, and DIIV whose music should probably never incite a mosh pit but often does anyway.

Kelela, Venus X DJ set, Shayne HBA DJ set @ Rough Trade
While the "alt-R&B" tag is getting very popular, and it's questionable how much of that stuff really deserves the "alt" prefix, Kelela definitely does. She works with various underground producers (mostly of the Night Slugs/Fade to Mind crew) and really pushes the boundaries of the genre. Tonight's her second of two sold out shows at Rough Trade.

Dub Thompson, Warehouse @ Baby's All Right
California's Dub Thompson will release their debut album in June via Dead Oceans. We've only heard one song of theirs -- the funky first single, "Dog Races," which is a little reminiscent of mid-'90s Beck or Soul Coughing. We're intrigued.

Despise You, Magrudergrind, Backslider, Grudges @ Silent Barn
Powerviolence legends Despise You play two NYC shows this weekend. Tomorrow's at Saint Vitus is with Full of Hell which is a great double bill, but tonight's is a smaller show, and sure to be a crazy one.

Porches, Frankie Cosmos @ Rodrigue's Coffee House at Fordham University
Tonight's Fordham show is buzzy twee popster Frankie Cosmos' last in NYC before she heads out on tour this month (of course there's plenty scheduled for when she gets home). It's with Porches, whose frontman Aaron Maine is in Frankie's live band (and Frankie, or Greta Kline, is also in Porches).

Psychedelic Furs @ Wellmont Theatre
It's still okay to dance like Molly Ringwald, especially when seeing Richard and Tim Butler's veteran alt-rock group turn on the hits. "Love My Way," "Into You Like a Train," and "President Gas" still sound great.

Eats Everything, My Favorite Robot, Lauren Lane, Dave DK @ Output
UK producer Eats Everything is a member of Dirtybird (whose roster also includes Claude Vonstroke, Justin Martin and more), and like many artists on that label, EE provides excellent house music which will fill Output tonight.

Filed Under: Dave DK, Eats Everything, Lauren Lane, My Favorite Robot
Categories: Music News, What's Going on Tonight in NYC
Comments
Leave A Comment
Back To Top
45 Great Music Documentaries to Stream Right Now
Young M.A announces new project ‘Off The Yak,’ shares “Hello Baby” ft. Fivi…
Kurt Cobain’s FBI file released to the public
Nine Inch Nails announce “only headline shows of 2021″ with Pixies
The Game shares his list of the top 10 rappers alive
Listen to Anika Pyle’s cover of ‘Golden Girls’ theme “Thank You For Being a…
We Are The Union share video for new song “Boys Will Be Girls” off upcoming…