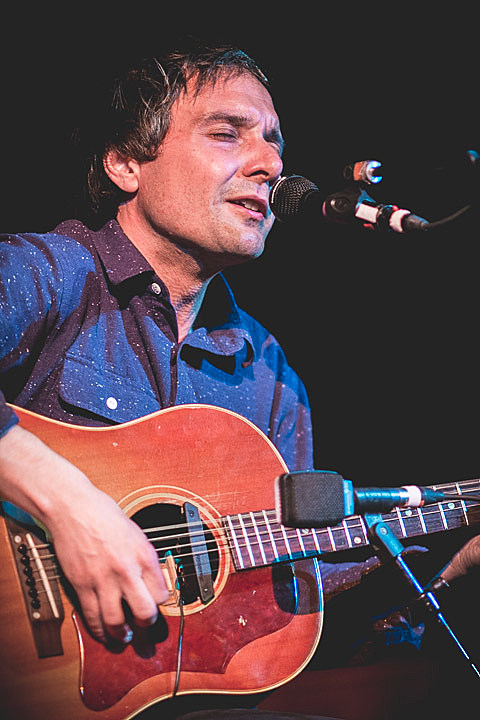 Daniel Rossen, William Tyler @ Music Hall of Williamsburg
Grizzly Bear/Department of Eagles singer/guitarist Daniel Rossen put out his solo EP Silent Hour/Golden Mile back in 2012, and he's now on his first-ever solo tour which ends tonight in his hometown. Opening is Merge-signed avant-guitarist William Tyler, who has played in Lambchop and Silver Jews.

Hamilton Leithauser @ Joe's Pub (early and late)
Of all the Walkmen's members side projects, frontman Hamilton Leithauser's not surprisingly seems to be the one with the widest appeal. We'll have to wait until June 3 to hear his debut solo album, Black Hours, but this week he'll likely play much of it at his four Joe's Pub shows. The first two (7:30 PM & 9:30 PM) are tonight.

Pharoahe Monch @ SOB's
One half of Organized Konfusion, Pharoahe Monch releases his fourth solo album PTSD today and celebrates at SOB's. If you haven't listened to the album yet, you can do so by streaming it below.

Spirit Caravan, Pilgrim, Bezoar, Polygamyst @ Saint Vitus
Spirit Caravan is one of Scott "Wino" Weinrich's many bands, who are currently reunited and back on the road with Providence doomsters Pilgrim. Tonight they play Saint Vitus, the Brooklyn bar that partially takes its name from another Wino band, Saint Vitus.

Lonnie Holley, Arto Lindsay, Georgia @ Baby's All Right
Outsider artist Lonnie Holley has made fans out of (and since collaborated with) Deerhunter's Bradford Cox and Black Lips' Cole Alexander. Tonight he returns to NYC for a show with no wave legend and experimental composer Arto Lindsay (of DNA and others), which should make for an excellent night. Lonnie will be joined by opener Georgia during his set, and maybe Arto will hop on stage too?

Kadavar, Sons of Huns @ Mercury Lounge
Germany's Kadavar throw back to the early days of hard rock/metal (think Sabbath, Blue Cheer, etc), and though reviving that stuff is more and more common these days, Kadavar do it well. Tonight's the second of two NYC shows on their current North American tour.

Juana Molina, Xenia Rubinos @ LPR
Argentine singer/songwriter Juana Molina is currently touring the US in support of her terrific 2013 Spanish-language folktronica LP Wed 21. Opening tonight is the NYC-based Xenia Rubinos, who also sings some (but not all) of her music in Spanish (she is of Puerto Rican and Cuban descent).

Martin Bisi, Black Valleys, Larkin Grimm, Parlour Walls @ Glasslands
Sonic Youth/Swans/etc producer Martin Bisi releases his new solo album, Ex Nihilo, today and it's as weird as you'd expect from him. He celebrates with this release show that includes a great bill of friends like White Hills side project Black Valleys (get it?), Larkin Grimm, and Eula side project Parlour Walls.

Yellowbirds, Landlady, Lone Wolf @ Shea Stadium
Prolific musician Adam Schatz is releasing a new album with his main project, Landlady, on July 15 via Hometapes. He recently released the album's newest single, "The Globe," which you can stream below. Tonight's show is part of his ongoing April residency at Shea.

Taking Back Sunday, The Used, Tonight Alive, Sleepwave @ Best Buy Theater
Taking Back Sunday have been back with the lineup who made Tell All Your Friends for a few years now, and just released their second album since reuniting (and third overall by this lineup). The new stuff may lack the fire that made TAYF so great, but at least tonight's another chance to see the old favorites by the lineup who recorded them. This is their first of three sold out shows at Best Buy Theater on this tour.