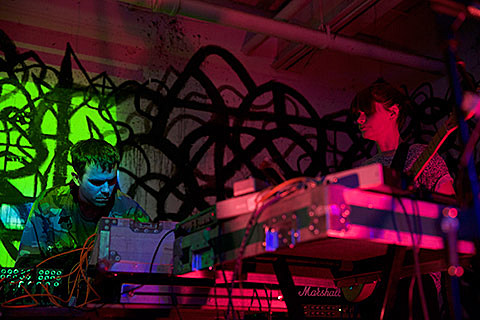 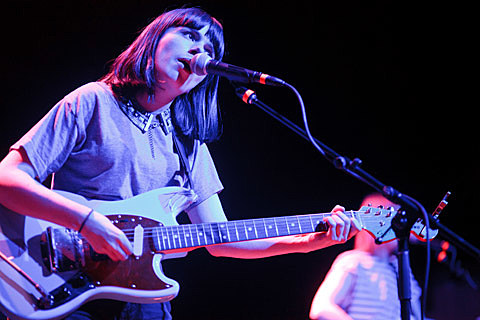 Factory Floor, Protect-U @ MHOW
Rooted in Detroit techno and acid, Factory Floor bring a stark, post-punk outlook to their sound. Don't expect an exact representation of the album tonight -- the band rip up their songs live, with live drums and electronics played on the fly.

Fanfarlo, Lilies On Mars @ Rough Trade
Fanfarlo continue to move away from the Arcade Fire-isms of their debut into the realm of synthy '80s pop. Tonight's the second of two NYC shows on their current tour with Lilies on Mars.

Kristeen Young featuring Pornography, Ken Fury @ Bowery Electric
Kristeen has a had a regular gig for the last few year's as Morrissey's go-to opener. Here's a chance to see her without some drunk person screaming "HOW SOON IS NOW!!!" in your ear. It's her third of four April residency shows gearing up for...yet another Morrissey tour.

Better Than Ezra @ Irving Plaza
We can't help but think of Norm McDonald's "Weekend Update" from the mid-'90s: "...and in music news, #1 on the college charts this summer was Better Than Ezra. And at #2...Ezra." Still funny.

Greg Ashley, John Brothers @ Cake Shop
Greg Ashley is best known for fronting talented Texas psych band The Gris Gris, but has released a number of solo albums along the way too. His new one, Another Generation of Slaves, heads into boozy, piano-y, '70s singer-songwriter mode.

Fear Of Men, Las Rosas @ Baby's All Right
It's a record release show for UK group Fear of Men whose new album, Loom, is full of shimmery indie pop. If you miss the days of the first Cranberries album (pre-"Zombie") you should definitely investigate further. This is an early show, over by 10 PM. And...FREE.

Courtney Barnett @ Other Music
Courtney Barnett's wordy psychedelic folk rock made for some excellent recordings on her double EP (that just finally got a US release this month), but her live show is essential as well, and not just a louder version of the record. You can get a taste of her show at tonight's in-store (as long as you ordered the record through Other Music and gained entry).

Patti Smith, Jesse Smith, Eric Hoegemeyer @ The Greene Space
Patti Smith and her daughter Jesse will join Eric Hoegemeyer for a night of music and poetry. They'll "perform their own compositions, the work of others such as Emily Dickinson, Walt Whitman, W.G. Sebald, Hildegard von Bingen, and salute friends and companions who have passed on in their own transformation.

Filed Under: The Factory Seconds, Young Boys
Categories: Music News, What's Going on Tonight in NYC
Comments
Leave A Comment
Back To Top