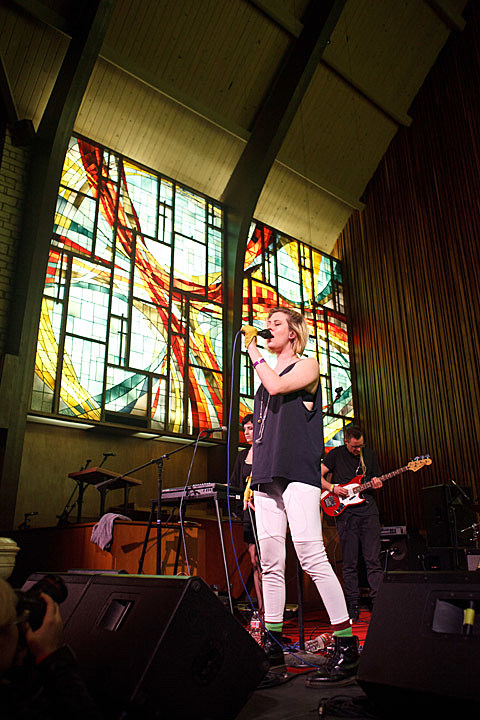 Andrew W.K. (Grand Piano Party) @ SubCulture
Andrew WK's got more Grand Piano Parties coming up this weekend, including one tonight and another tomorrow. While we don't always associate Andrew WK with grand pianos, we're sure he'll deliver on making it a party.

The Feelies @ The Bell House
Legendary New Jersey band The Feelies have proved influential on generations of post-punk, jangle pop and alternative rock bands, and their 30+ year old material still sounds timeless today. They're no slackers in the live show department either -- they play a few shows in the area every year these days and are always worth catching.

EMA, Downtown Boys @ Mercury Lounge
EMA's new album, The Future's Void, is just as and sometimes more devastating than its predecessor, with a killer variety of tunes that pull from industrial, alternative rock, folk and more. She's on tour with the saxophone-driven, politically-fueled Providence punk band Downtown Boys, who are worth showing up on time for. Sold out.

Bo Ningen, These People, Ken South Rock @ Knitting Factory
One of the most talked-about bands at SXSW this year was Japanese band Bo Ningen, due in no small part to their wild, guitar-swinging, in-your-face shows. Experience them for yourself -- this is the first of two NYC shows for the band.

The Bad Plus @ Jazz Standard (early set and late set)
Going for nearly 25 years, The Bad Plus continue to straddle the line between jazz and modern rock. Their new record is an album-length recording of Stravinsky's "THe Rites of Spring." Tonight's the second evening of a four-night run at Jazz Standard, with an early and late show.

Timber Timbre, Fiver @ Music Hall of Williamsburg
Timber Timbre's great and often-underrated dark balladry sounds as good as ever on this year's Hot Dreams, and maybe it's actually not that underrated 'cause tonight's show is sold out.

Heaven's Gate, Lost Boy?, The Veda Rays, Heeney, Sunflower Bean @ Death by Audio
Out of the ashes of Sweet Bulbs, Heaven's Gate took some of their old band's dreamy noise, but took it in a significantly different direction, playing to singer strengths and became more of punky rock band...while still using a lot of effects pedals.