Against Me! in Chicago in April (more by Jeff Ryan) 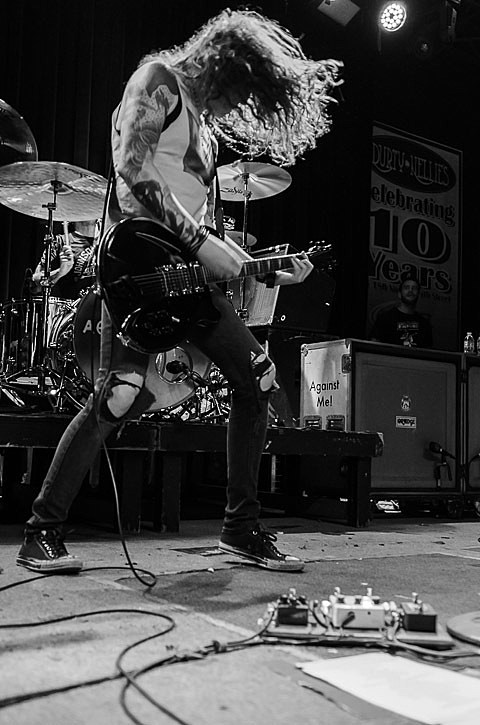 Against Me!, Tony Molina, Big Eyes @ Webster Hall
Against Me! are back this year with a new album, a new lineup, and a reinvigorated sound that's only better live than it is on the solid Transgender Dysphoria Blues. They played MHOW earlier this year and tonight they return to NYC for a show at the larger Webster Hall. Support is great too, coming from the indie pop punks Big Eyes and Weezer/Teenage Fanclub/Thin Lizzy worshipper Tony Molina.

Pictureplane, LODRO, Ought, Truthers, Bodyparts @ Brooklyn Night Bazaar
rooklyn Night Bazaar offers weekends of local artisan shopping, gourmet eats, beer and wine, ping pong, black light minigolf and music all under one Greenpoint roof. This is a super-solid bill, with the big curiosity draw being Ought, who just got "Best New Music" in Pitchfork.

Herzog, Shale Satan @ Cobra Club
Cleveland indie rockers Herzog are back with a genuinely terrific new album, Boys, that recalls the heyday of '90s college radio. This is good stuff.

Greg Proops @ The Bell House
This is a live taping of the comedian's Greg Proops is the Smartest Man in the World podcast. Expect arched eyebrows and much laughter.

LiveFastDie, Pampers, Foster Care, Citizen Blast Kane @ Union Pool
New Hampshire's LiveFastDie are named after a GG Allin tattoo and play a similar style of punk -- albeit tighter and with less feces. They headline what is a great night, with excellent locals Foster Care and Pampers on the bill as well.

CHVRCHES, The Range @ Terminal 5
Who'd have thought a year ago that Scottish synthpop band CHVRCHES would get so big? Tonight's their second of three sold-out shows at Terminal 5.

Mighty Mouse, Lane 8, Alex English DJ set @ Slake
London's Mighty Mouse recently made his debut as 1/2 of Du Tonc with Van She's Matt Van Schie, but he's also a solo artist and plays on his own in NYC tonight.

Skull Defekts, PC Worship, Ornament, Zomes (DJs) @ Trans-Pecos
Though Swedish experimental rockers The Skull Defekts often count Lungish's Dnaiel Higgs as a member, they had been touring without him this time. However, for their NYC shows today and tomorrow, Daniel will be on board, making these extra special. Today's show is outside of Trans Pecos and is also a BBQ.

Ghost Of A Saber Tooth Tiger @ Rough Trade NYC
Sean Lennon has made experimental, forward-thinking music in his career, but with GOASTT, he fully indulges in the family business of pop that is, for lack of a better word, Beatlesque. This show is free with purchase of their new album.

Berlin, The Cringe @ The Cutting Room
Beginning their career as kinky synthpop, Berlin morphed into superstars by the time of their megahit "Take My Breath Away." Only singer Teri Nunn remains of the original '80s lineup. Opening are The Cringe, aka "that band Rachel Ray's husband is in."

The Jesse Boykins III show at Irving Plaza tonight has been cancelled. Refunds are available at point of purchase.