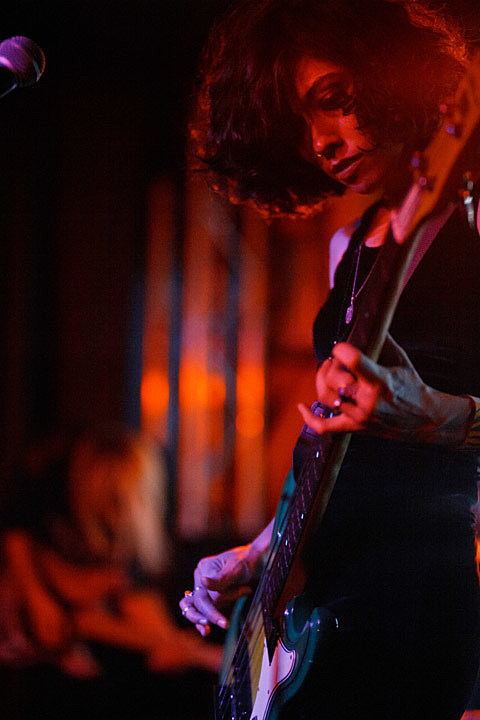 Alexis Taylor @ Manhattan Inn
In the US for the William Onyeabor tributes, the Hot Chip singer will be previewing his new album at this free matinee show. Special guests are being promised.

Bladerunner Trio (John Zorn, Bill Laswell, Dave Lombardo) @ Le Poisson Rouge
Zorn's Bladerunner project has been a thing for a while; it first appeared back in 2000. The core lineup includes him, legendary bassist/producer Bill Laswell, and ex-Slayerdrummer Dave Lomardo. While they've never recorded anything official, you can catch them tonight.

Slint, Spires That in the Sunset Rise @ Bowery Ballroom
Slint only put out two albums -- 1989's Steve Albini-produced Tweez and 1991's legendary Spiderland -- but their brand of post-rock and post-hardcore has proved to be highly influential over time and it's held up very well.

Suzanne Vega, Ari Hest @ City Winery
A singer-songwriter for over 30 years (best known for "Tom's Diner" and "Luka"), Vega just released her new album, Tales From the Realm of the Queen of Pentacles where she samples 50 Cent on one track, believe it or not.

Weekend, Cities Aviv, Grey Zine @ Glasslands
Weekend moved from San Francisco to Brooklyn, dialed back the reverb and upped the melody/danceabilty in the music, the result of which was last year's terrific Jinx. Volume level remained constant: deafening.

Matt Pond PA, The Lighthouse & The Whaler @ Rough Trade
Long-running indie band Matt Pond PA are celebrating the 10th anniversary of their album, Emblems, for this current tour which makes two stops in NYC, this being the first.

Jessy Lanza, Ricky Eat Acid @ Santos Party House
Ontario singer/producer Jessy Lanza released her debut album Pull My Hair Back via Hyperdub (Burial, Laurel Halo) earlier this year. It was co-produced and co-written by Jeremy Greenspan of Junior Boys, and falls somewhere between future R&B, the synthpop of Grimes, and the type of production that usually feels at home on Hyperdub.

The So So Glos, Juan Wauters, Flagland, Krill, Patrick Stickles (DJ set), Baked (DJ set) @ Shea Stadium
The So So Glos are no strangers to Shea Stadium (some of them live there) and are ofter at their raucous best at their home. This stacked lineup is being billed as a "Tooth Fairy" benefit, with all proceeds going into the mouth of a friend.

CHVRCHES, The Range @ Terminal 5
Who'd have thought a year ago that Scottish synthpop band CHVRCHES would get so big? Tonight's the last of three sold-out shows at Terminal 5.

Skull Defekts, Sannhet, Surviva @ The Studio at Webster Hall
Much like they did in 2011 for Peer Amid, Daniel Higgs and Swedish experimental rockers Skull Defekts have joined forces for new album  Dances in Dreams of the Known Unknown which juxtaposes Higgs' beautiful, fractured poetry spewed over a tense arrangement. Higgs will be with the band tonight.