Wye Oak in Prospect Park in 2012 (more by Amanda Hatfield) 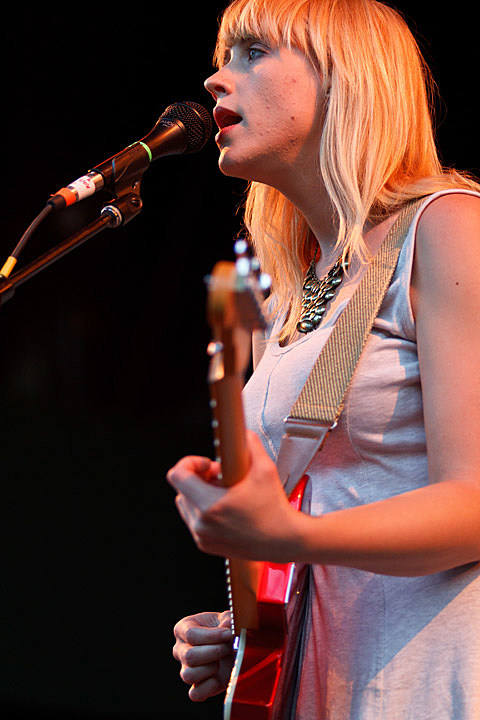 tUnE-yArDs, Olga Bell @ Rough Trade
tUnE-yArDs' new album, Nikki Nack, follows 2011's w h o k i l l, and like that album this one sees her combining several genres that shouldn't sound good together but somehow managing to create accessibility out of the inaccessible. Dirty Projector Olga Bell opens, making this a solid double bill, and it's sold out. tUnE-yArDs will be back for two larger NYC shows at Webster Hall in June.

Foals, Cage the Elephant, J Roddy Waltson & the Business @ Terminal 5
Though they're best-known for their slow build anthems, Foals' twitchy anarchic beginnings rear their head live. Singer Yannis Philippakis is a fearless daredevil on stage, prone to flying leaps into the audience. Be prepared to catch him.

A Minor Forest, The Austerity Program, Lushes @ Glasslands
Bay Area math rock trio A Minor Forest broke up in 1998 but reformed last year, reissued much of their Clinton-era work, and are now touring in support.

Shlohmo, Jim-E Stack, D33J @ MHOW
Shlohmo had already been making killer electronic music, but ever since he began collaborationg with R&B singers (Jeremih, How to Dress Well, Banks), it seems his career has deservedly been given a boost. Tonight's his first of two NYC shows this week. It's sold out, but tomorrow's Bowery Ballroom show is still on sale.

Cam'ron, DARK, Lil Uzi @ The Wick
Later this month, Cam'ron will play a big show at Terminal 5 with A-Trak who he's been recording with. But tonight you can see him sooner than that and in a smaller place at new-ish Brooklyn venue The Wick.

Slick Rick @ BB King's
For another hip hop option, you can see veteran rapper Slick Rick still going strong over 25 years after the release of his debut album, at BB King's tonight.

Big Terrific @ Cameo Gallery
Max Silvestri hosts the free weekly comedy show in the back of Williamsburg's Lovin' Cup. No word on who's performing tonight, but Max usually lets us know via his Twitter.