Liars at Warm Up in 2013 (more by Amanda Hatfield) 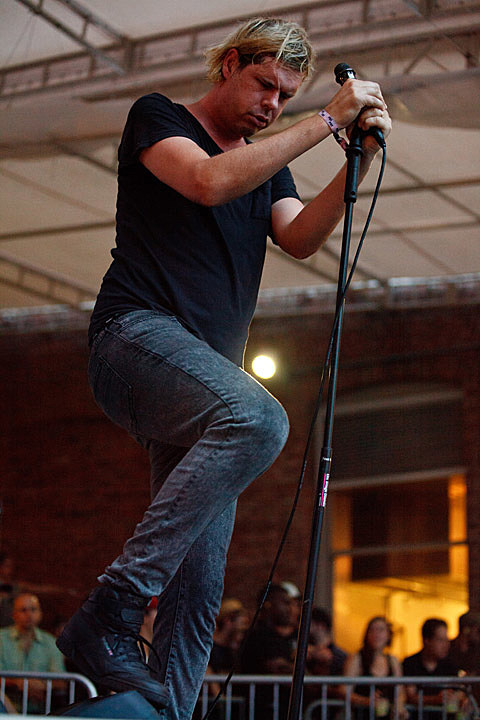 Liars, Jana Hunter @ LPR
With their industrial/EBM-influenced new album, Mess, Liars deliver their most accessible, danceable batch of tunes in ages. With Pit Er Pat's Butchy Fuego currently on drums, Liars are a real force. Their first of two NYC shows this week.

Mystic Braves @ Baby's All Right
Los Angeles's Mystic Braves look like they've been transported from 1966 and that's pretty much what they sound like too: 12-sting guitars, surfy leads, combo organ, the occasional flourish of spanish horns. Tonight's show is free, doors at midnight.

Bombay Bicycle Club, Royal Canoe @ Webster Hall
UK indie pop band Bombay Bicycle Club put out their fourth album this year, So Long, See You Tomorrow, which is both different from all three of their other albums and a lot stronger than it seemed like BBC's fourth album would be when they debuted as a post-Arctic Monkeys/Strokes band in '09. Tonight's their first of two sold out Webster Hall shows.

Marnie Stern, Hunters, Glockabelle @ The Wick
Marnie Stern's math rock guitar heroics and funny stage banter make all of her shows a sight to see, and the strength of the actual songs always back up her tricks. Hunters should be a good primer for her set.

Shlohmo, Jim-e Stack, D33J @ Bowery Ballroom
Shlohmo had already been making killer electronic music, but ever since he began collaborationg with R&B singers (Jeremih, How to Dress Well, Banks), it seems his career has deservedly been given a boost. Tonight's his second of two NYC shows this week.

Joseph Arthur (the songs of Lou Reed) @ City Winery
Singing/songwriting vet Joseph Arthur has been very active with his original material lately, but he's now taking a break from that to honor one of his friends and influences, the late Lou Reed. He'll release a tribute album of Lou's songs next week (5/13) and he's now playing them on tour, including tonight's NYC show.

Peaking Lights, Protect-U, Imperial Topaz @ Glasslands
Peaking Lights make psychedelic pop that earns that title for being actually trippy, not just for paying tribute to the late '60s. Tonight's show is a good bill all around with their past collaborators Protect-U and local ambient pop duo Imperial Topaz. 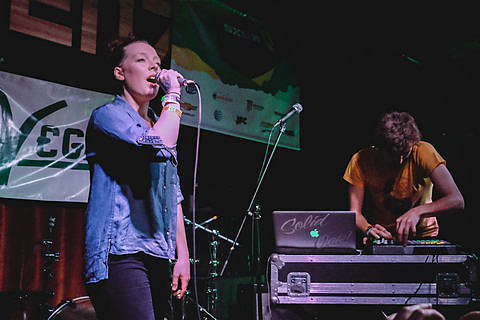 Sylvan Esso, Mother, Elizabeth Rose @ The Westway
Sylvan Esso's singer Amelia Randall Meath and beatmaker Nicholas Sanborn have palpable onstage chemistry, making this duo a lot of fun to watch. Their debut album is out next week and this show is one of the official Governors Ball pre-parties.

The Body, Whitehorse, Gnaw, Theologian @ Saint Vitus
It's gonna get weird and heavy at Vitus tonight with Australian sludge/noise unit Whitehorse, likeminded Americans The Body, and compelling local support from Gnaw and Theologian.

Pharoahe Monch @ Littlefield
Organized Konfusion member Pharoahe Monch recently celebrated his fourth solo album, PTSD, with a release show at SOB's, and tonight the NYC rapper gives his hometown another chance to catch him in the flesh.

The Felice Brothers, MiWi La Lupa @ Mercury Lounge
The folk rockin' Felice Brothers have a new album coming out this June, but maybe we'll get to hear some of it at tonight's Mercury Lounge show. It's sold out, but they'll be back in NYC for a much larger, not sold-out show at Webster Hall in July.

Balancer, Tigue @ WITHOUT Fest at Frieze Art Fair
Currated by the fine folks at Tom Tom Magazine , the WITHOUT festival is run in tandem with the Frieze Art Fair on Randall's Island. Today's the first of four and happens outside the festival gates and is free.