La Sera at Bowery Ballroom in 2012 (more by Fred Pessaro) 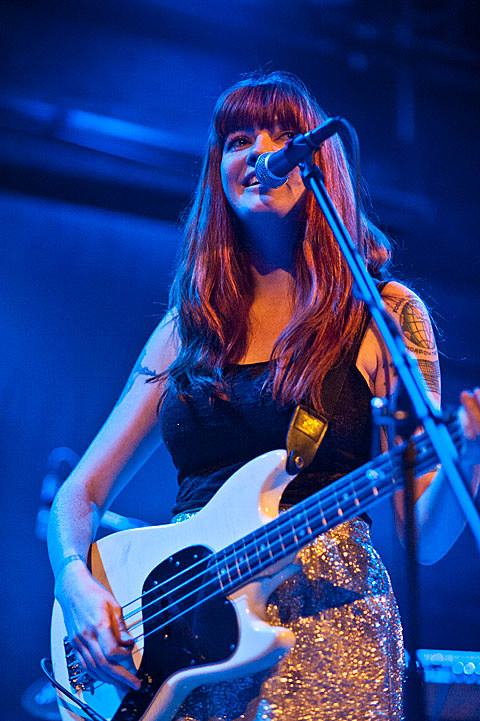 Vulture Fest
New York Magazine's pop culture blog Vulture is throwing this two-day  festival this weekend featuring a bric-a-brac of panels and events based around movies, TV, music and comedy. Most of it is happening at Milk Studios in Manhattan.

La Sera, High Waisted, Springtime Carnivore @ Baby's All Right
With Vivian Girls behind her, Katy Goodman's main focus is now on the more pop-oriented La Sera. Tonight's the record release show for her new album, Hour of the Dawn.

Tennis, Ski Lodge @ Music Hall of Williamsburg
Poppy Colorado duo Tennis are currently working on their new album and may be playing some new stuff. They sing to tykes at Kidrockers at NYU's Skirball Center during the afternoon before tonight's MHOW show.

Shark?, Howth, Soft Black, Pinegrove @ Shea Stadium
If you like sugary garage punk like Wavves, Shark? are one of the better local bands in Brooklyn doing that sort of thing.

Cretin Stompers, LODRO, Downer, Honduras, Baby Acid @ The Flat
Featuring members of Wavves and the Reatards, scuzzy trio Cretin Stompers have some ultra-catchy songs underneath that low-fi noize. They're the not-so-secret guests tonight that's an otherwise fun bill, with Cassie Ramone and Tamaryn DJing between sets.

The Men, Obits, Nude Beach @ The Wick
If you haven't checked out The Wick, finally open after a slow gestation period, here's a good show to check out with lots of great, no-nonsense guitar rock.

Brigid Dawson's Fare Thee Well Opening Reception @ Worship
Brigid is not part of the current touring line-up of Thee Oh Sees, but here's a chance to see her artwork at Williamsburg vintage clothes store Worship. Tonight's the opening with beverages in the store's open backyard and a performance by Jim McHugh.

Agoria, Kindness, Ripperton, Lusine, Nicole Ross @ Verboten
Kindness has a new album coming out which reportedly features Robyn, Blood Orange, and Kelela. Maybe he'll give us a taste of some of that tonight.

Ulcerate, Inter Arma, Car Bomb @ Saint Vitus
It's a solid double header for metal at Vitus tonight with the atmospheric death metal of Ulcerate and the psychedelic black-ish metal of Inter Arma.