Little Dragon at Prospect Park in 2012 (more by Ryan Muir) 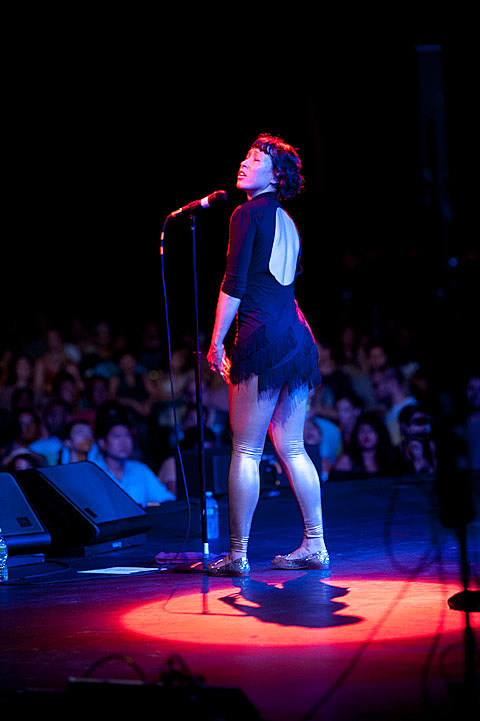 Graveyard, Bombus @ Webster Hall
Retro rockers Graveyard hearken back to the proto-metal hard rock riffs of the early '70s and they do justice to the era. Catch them melting faces at Webster Hall tonight.

Little Dragon @ Rough Trade
Little Dragon's agreeably chilled out new album, Nabuma Rubberband, is out on Tuesday but here's a chance to A) pick it up early then and B) see them in an intimate setting like this, ahead of their tour of big venues (like upcoming T5 shows in June). Buy the album to get a wristband for the show which starts at 2:30 PM.

of Montreal, Dream Tiger @ Le Poisson Rouge
You never fully know what to expect from pop weirdos of Montreal, other than the fact that it's going to be colorful, quite the spectacle, and quite the party. Tonight's show is sold out.

Beverly, Laila, The Suzan, Doble Pletina, FLOWN @ WITHOUT Fest at Frieze Art Fair
Currated by the fine folks at Tom Tom Magazine , the WITHOUT festival is run in tandem with the Frieze Art Fair on Randall's Island. Today's the last of four and happens outside the festival gates and is free.

Ludwig Persik @ Baby's All Right
After the R. Stevie Moore show, it's a free performance from Ludwig Persik who makes fanciful, laptop pop.

Vulture Fest
New York Magazine's pop culture blog Vulture is throwing this two-day  festival this weekend featuring a bric-a-brac of panels and events based around movies, TV, music and comedy. Most of it is happening at Milk Studios in Manhattan.

Heathered Pearls (live), Uumans, Yinka Pascal @ Glasslands
Heathered Pearls is the moniker of Polish ambient musician Jakub Alexander who now lives in Brooklyn.Last year's debut LP, Loyal, released through Ghostly International is lush and transportive, which could make a nice way to ease out of the weekend.

Marc Ribot's Ceramic Dog, Chris Cochrane's Collapsible Shoulder @ Rough Trade
Guitar great Marc Ribot has collaborated with everyone from Tom Waits to John Zorn, but tonight he takes the lead with his own band, Ceramic Dog.

Shy Girls, Tei Shi @ The Panther Room
Portland's Shy Girls make the kind of indie-R&B that has been very in style since the breakout of artists like How to Dress Well (who he especially sounds like). Last night, he opened for Haim at the large Terminal 5 but tonight you can see him in the much smaller venue, The Panther Room (at Output).

Clean Girls, Fins, Exocomets @ Silent Barn
It's a night of noisy rock at Silent Barn, and if you're going to this show one band we recommend catching is Fins, who make messy post-hardcore that they recorded on an EP with Ben from The Men, who know a thing or two about messy post-hardcore.

HAIM, Tennis @ Terminal 5
A modern blend of Fleetwood Mac and Wilson Phillips, HAIM just keep getting more popular. This is the second of two sold-out shows at T5.