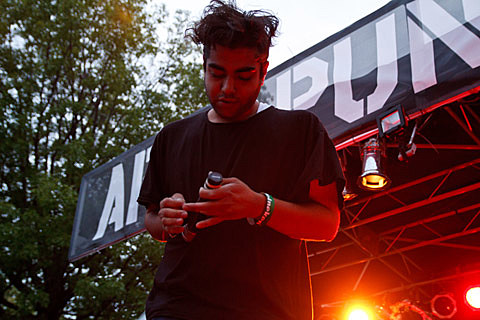 Heems, Zulu P., Girls In Uniform @ Baby's All Right
There's never a lack of chances to catch former Das Racist member Heems in NYC, and especially since there aren't many show options tonight, this could be a good chance.

OFF!, Cerebral Ballzy, NASA Space Universe @ Asbury Lanes
Another thing you could do with not many options in NYC is head to NJ to catch hardcore supergroup OFF! (ex-Black Flag, Circle Jerks, Hot Snakes, Rocket from the Crypt, Redd Kross, etc) whose tour hits Asbury Lanes tonight. They'll be in NYC on Saturday (5/17).

Dirty Fences w/ "Special Surprise Co-Headliner," Hector's Pets, Games @ Grand Victory
It's a night of garage rock at The Grand Victory tonight and a "special surprise guest co-headliner" is promised. Who could it be?

Keren Ann @ Joe's Pub
Singer-songwriter and multi-instrumentalist Keren Ann was just out on a mini-tour, and tonight she's back in NYC to wrap it up at Joe's Pub.