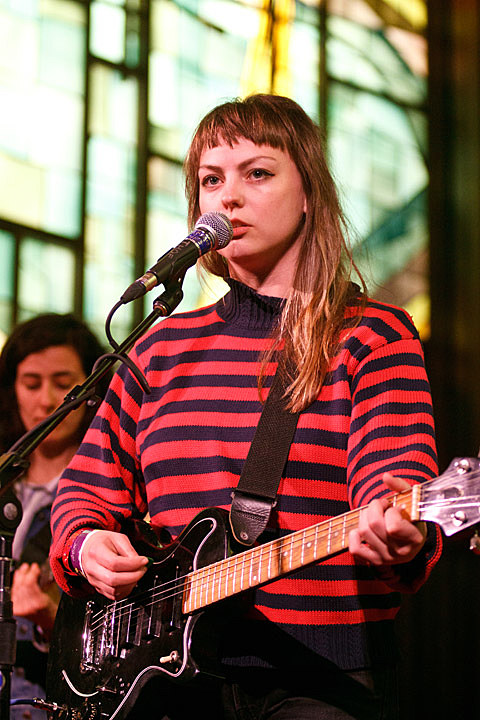 Son Lux, Rafiq Bhatia @ Le Poisson Rouge
Son Lux has collaborated with Sufjan Stevens, and if you like Sufjan's style of art pop you might dig Son Lux's too. Opening is indie-friendly jazz musician Rafiq Bhatia.

The Bots, Lolawolf, Lewis Lazar @ Baby's All Right
Punky duo The Bots are still very young but they've already toured with some huge bands (Yeah Yeah Yeahs, Blur, Dropkick Murphys) and tonight they'll be in a much smaller room than the ones they played on those tours at Baby's All Right.

The Wailers (performing "Legend" & more), Makua Rothman @ Brooklyn Bowl
Bob Marley's band The Wailers are celebrating the 30th anniversary of his posthumous greatest hits album, Legend, which collected career faves like "Get Up, Stand Up," "No Woman, No Cry," "Redemption Song," "Waiting In Vain," and plenty more.

Owen Pallett, Doldrums @ Glasslands
Having collaborated with Arcade Fire, Brian Eno and others in the last year, Owen Pallett straddles the line between pop musician and composer, a tightrope act he walks deftly on new album In Conflict. Read our recent interview.

Lykke Li, Questlove (DJ Set) @ MoMA (Party in the Garden Afterparty)
Lykke Li will be in NYC later this year for bigger shows, but tonight she plays an intimate set for MoMA's annual big-ticket fundraiser afterparty. Tickets (still available) aren't cheap, or even kinda cheap but its tax deductible, a good opportunity for hobnobbing, and an early look at her upcoming tour.

Angel Olsen, Promised Land Sound @ Music Hall of Williamsburg
Angel Olsen's last record was a throwback to '60s loner folk that did justice to the genre, but on this year's Burn Your Fire For No Witness, she injects modern day indie rock flavor that changes things up but keeps her old-soul songwriting in tact. It's a great record, and the songs sound terrific live too.

Howler, Frankie Teardrop, Modern Rivals @ Rough Trade
Minneapolis' Howler are descendants of The Replacements' sloppy guitar pop tradition, as heard on the band's new album, World Of Joy, which owes more than a little to The Strokes lineage as well. This is their first of two NYC shows this week.

Todd Barry @ The Bell House (early and late)
A veteran of the NYC indie comedy scene and known now nationwide (though maybe not by name), Todd Barry works without a net (or at least a routine) by talking to the audience the whole set. Two shows tonight, both sold out.

Reagan Youth, Gash, All Torn Up, Dust Angel @ The Rock Shop
It's a punk night at The Rock Shop headlined by Queens vets Reagan Youth, who were initially active in the '80s and have been again since regrouping in 2006 (though guitarist Paul Bakija is the only original member remaining).

Colin Blunstone @ City Winery
Earlier this month, The Zombies played Austin Psych Fest with countless younger bands they have most likely influenced. Now, lead singer Colin Blunstone is continuing to tour without The Zombies (but with his backing band), including tonight's NYC show. He plays some Zombies songs, but don't go expecting an Odyssey and Oracle set or anything.