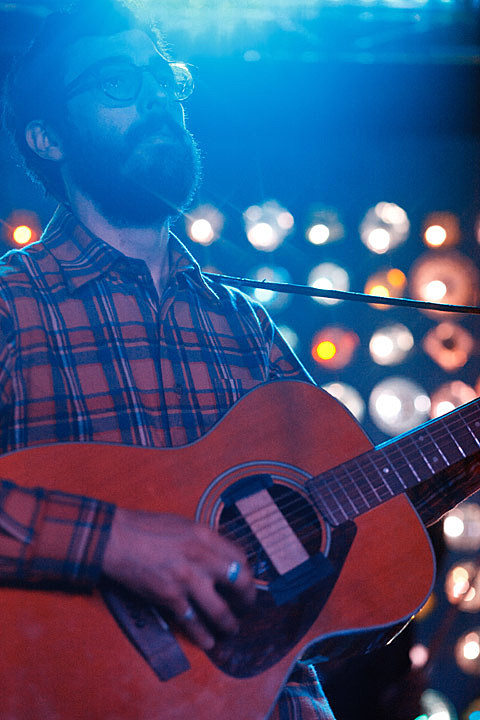 Woods, Quilt, Frankie Cosmos @ Bowery Ballroom
While they have a rep for noodling, Woods these days are song-focused, poppy, tight, and when they do stretch things out, there is purpose and direction (and serious chops) to the jams. Tonight's a terrific bill all-around with Quilt (who are firing on all cylinders these days too), and up-and-comer Frankie Cosmos.

Chromeo, Oliver @ Terminal 5
An amalgam of early-'80s electro-R&B (Cameo, Rockwell, various Jacksons), Chromeo are not afraid to embrace the cheese. And if you aren't either, it's a fun time. The band's new album White Women, is out now.

Elbow, John Grant @ Webster Hall
Manchester's Elbow make "heartfelt," "anthemic" and "crowd-pleasing" not dirty words. The band's new album, The Takeoff and Landing of Everything is out now.

Seahaven, Adventures, Foxing, Little Big League @ The Studio at Webster Hall
Seahaven's tour hits The Studio at Webster Hall tonight with some great openers: Adventures, the band that includes 3/4 of Code Orange Kids but are more punky/less aggressive than that band, Foxing, who kind of sound like the screamo Antlers, and Little Big League, who mix a little math and a little punk into otherwise traditional indie rock.

Screaming Females, Bleeding Rainbow, Marvin Berry and The New Sound, Lilth Velkor @ Brooklyn Night Bazaar
Screaming Females have a new live album which they're celebrating with this release show. It's a good one, though of course actually seeing them live is the way to go, which you can do tonight for free. Good openers too, including punky shoegazers Bleeding Rainbow and Screamales' Don Giovanni labelmates Marvin Berry & the New Sound.

Flagland, Greys, HSY, The Beverleys @ Death by Audio
Tonight Brooklyn venue Death by Audio hosts a triple header of rippin' Canadian punk from Greys, HSY and The Beverleys. If you like it loud, fast, and noisy, you'll dig all these bands. Local representation on the bill comes from Flagland.

The Lillingtons, Mikey Erg, Stabbed in Back @ Knitting Factory
This is one of a few rare Northeast reunion dates for '90s era punks The Lillingtons, who along with The Queers, Screeching Weasel and others, did a great job bringing back Ramones-inspired punk during that decade.

Solstafir, Junius, So Hideous @ Saint Vitus
If you like epic, heavy atmospheric rock there's no better place to go in NYC tonight than Saint Vitus. The show is headlined by Iceland's Solstafir whose post-black metal may not be as popular as other similar bands here in America but it really deserves to be. Before them it's their tourmates Junius who are more "heavy post-rock" than metal, and local openers So Hideous fit the bill perfectly.

Breton, Kid Karate, Hoodlem @ Glasslands
After a couple failed attempts to play here recently, UK dance act Breton finally make it past the visa department to play Glasslands tonight. If you like Hot Chip and Metronomy, you might want to investigate further.

Black Marble, Future Punx @ Baby's All Right
Stick around Baby's after King Gizzard for this late-night show with with a couple new wave/post punk influenced Brooklyn locals. If you have't caught Future Punx, they're especially fun.

Morcheeba @ Warsaw
Trip hop vets Morcheeba released Head Up High last year, their second with singer Skye Edwards returning to the fold. (She'd been out of the band from 2003 - 2009.) The band haven't messed with their patented sound too much but, why yes, there are a couple nods to dubstep in there too.

Walter Martin (of The Walkmen) @ Joe's Pub
The Walkmen are currently on hiatus but many of its members are currently taking the solo route, including Walter Martin who put out his new children's album this week. He'll be playing songs off that tonight, and the show's all ages, so bring your kids! For the show, Walter will play with a full band, special guests and a chorus conducted by his Walkmen bandmate Hamilton Leithauser. Other guests include Matt Barrick of The Walkmen, Kat Edmonson, members of French Kicks, and "a very special surprise guest who sings on Walter's album."

HighasaKite, Faces on Film @ Mercury Lounge
Norwegian band Highasakite were supposed to play NYC last month but ended up canceling the show so they could do a West Coast run opening for London Grammar. They made good on their promise for a make-up show, which is tonight.

Jukebox The Ghost (DJ Sets), Sinkane (DJ Set), Body Language, Frances Cone @ Pier 2 at Brooklyn Bridge Park
This is a free outdoor show, and the last of the official pre-parties for the NYRR Five-Borough Series (which is run on Saturday).

Jeffrey Lewis, Crazy and The Brains, Heeney, L.A. Boobs @ Shea Stadium
Jeffrey Lewis is one of NYC's consistently great anti-folk singers. He plays a lot but tonight's a doubly great one because he's joined by the likeminded Crazy & the Brains.