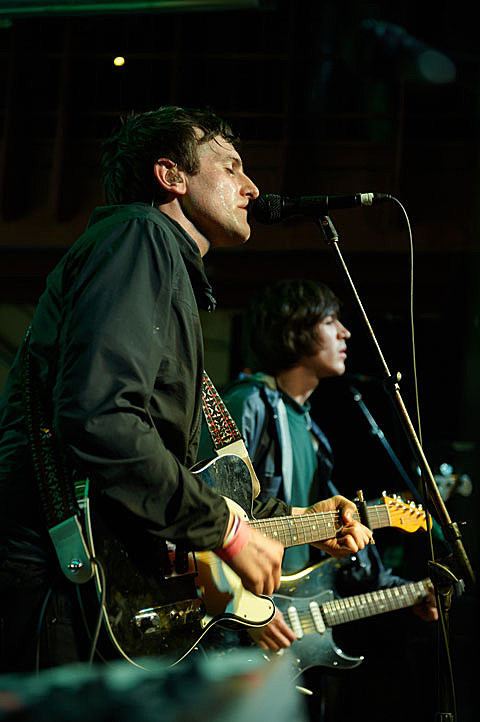 The Pains of Being Pure at Heart, Fear Of Men, Ablebody @ Bowery Ballroom
With a killer new lineup of the band and an enjoyable new album, dare we say Pains are better than ever? This tour -- with terrific UK band Fear of Men and Ablebody (who are also in TPOBPAH lineup -- is a can't miss for indiepop fans.

Death Cab For Cutie, Hamilton Leithauser @ Capitol Theatre
It's been a while since Death Cab went on a proper tour but they'll remedy that by kicking off a short Northeast run tonight. This one's just outside of NYC and also includes Walkmen frontman Hamilton Leithauser, which should make for a good double bill of two artists who put out some of the more memorable indie songs of the 2000s.

Reigning Sound, Nude Beach @ Brooklyn Bowl
Reigning Sound, the Memphis garage rock band led by Greg Oblivian, signed to Merge back in 2012 and they're now set to release their first album for the label, Shattered, which comes out on July 15. Expect new songs tonight.

Cass McCombs, Endless Boogie @ MHOW
Cass McCombs released a whopper of a double album last year -- the acclaimed Big Wheel and Others and between that and the two albums he released in 2012 (not to mention all his other albums), he's got a lot choose from. Prediction: he plays at least a few brand-new songs tonight.

Leverage Models, Weeknight, Long Arms @ Cameo Gallery
If you love Big '80s music like The Associates, ABC, and (early) Spandau Ballet, you will probably dig the widescreen sounds of Leverage Models who have a firm grasp on that, right down to the saxaphone and syn-toms.

Andrew W.K. in conversation with Phillip Crandall @ Strand Bookstore
Phillip Crandall wrote the 33 1/3 series book on Andrew WK's 2001 debut, I Get Wet, and tonight he discusses it with AWK himself. Free admittance with purchase of the I Get Wet book.

'We Are the Best' screening w/ Petal War @ Trilock Fusion Center for the Arts
Though writer/director Lukas Moodysson has gone to dark places in the past (Lilya 4-Ever? Yikes) this is a sweet, funny movie about three misfit 13-year-olds who decide to start a punk band in 1982 Stockholm. If some bad language isn't a problem, it makes a good family film. This is being screened as part of Rooftop films with a live performance from the very appropriate PetalWar.

'Upside Down: The Creation Records Story' @ Videology
Part of BV editor Bill Pearis' "Sound & Vision" series at Videology, tonight features the documentary about the label that gave us The Jesus & Mary Chain, My Bloody Valentine, Oasis and many more. It's an entertaining and very rock-n-roll film (though the Scottish accents are THICK). Bill's DJing afterwards and they're giving away a pass to this year's NYC Popfest at the screening. Free.

Michael Hurley @ Union Pool
Having spent time in the '60 Greenwich Village scene with his work covered by Holy Modal Rounders and others, acclaimed folk songwriter and performer Michael Hurley has remained active and prolific into his '70s. Advance tickets of tonight's show are sold out, but a limited amount will be available at the door.

Unholy Grave, Birdflesh, Mesrine, War Master, Entrails @ Saint Vitus
Unfortunately, Excruciating Terror had to drop off this show but it's stacked regardless. Japanese grinder Unholy Grave return for their first NYC appearance since 2006, Swedish grinders Birdflesh make their first NYC appearance ever, Canada's Mesrine and Swden's Entrails both make their US debuts tonight, and the bill's rounded out by ex-Insect Warfare Bolt Thrower worshippers War Master.

LVL UP, Kite Party, Three Man Cannon, Downies @ David Blaine's The Steakhouse
Philly bands Kite Party and Three Man Cannon (ex-Tigers Jaw) are currently on tour together, and likeminded in that they're decidedly non-punk bands coming from a punk scene. Local regulars LVL UP headline and openers Downies include members of both LVL UP and Porches.

UPDATE: both the Ex-Cult show and the Stone Jack Jones show at Mercury Lounge were cancelled due to a giant sinkhole outside of Katz's Deli. They may be moved to other venues, stay tuned.