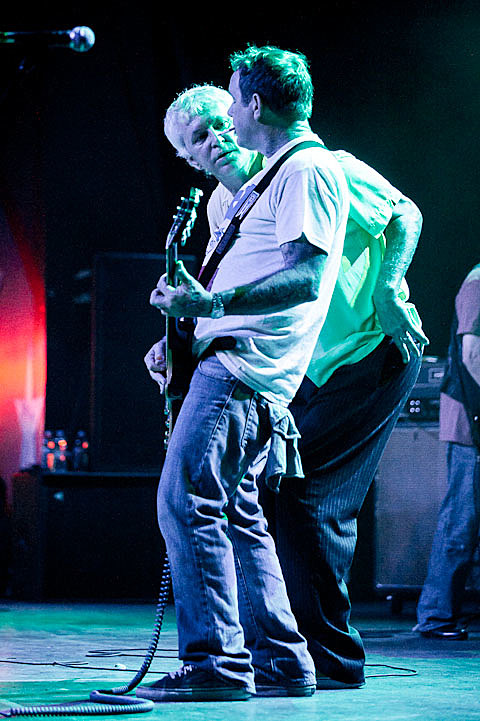 Guided by Voices, Doug Gillard, Atomic Forces @ Bowery Ballroom
With 22 albums (most of which have about 20 songs on them) and growing it's no wonder Guided by Voices shows often go to epic-length. Their sold-out show on Friday at Bowery Ballroom is in support of their kickin' new album, Cool Planet, that mines Bob Pollard's endless supply of hooky riffs. Opening is former GBV member Doug Gillard whose new album, Parade On, is punchy powerpop goodness. Sold out, but Bowery has released tickets a couple times this week so it might be worth checking the Ticketmaster page. They'll also be back in July.

Pujol, Sam Coffee & The Iron Lung, Scully, Jupiter Boys @ Death by Audio
Nashville's Pujol gets ambitious on his new album, KLUDGE, which flirts with '70s rock production that works more often than not. It's also a terrific batch of tunes, and he's got a lot more to say than most garage rockers. Live, Pujol are always wild force of nature and tonight finds him in his natural habitat. He plays twice tomorrow: a free day show at Rough Trade and in the evening at Mercury Lounge.

Hailu Mergia and Low Mentality, Zongo Junction @ LPR
Ethiopian one-man funk band Hailu Mergia (who's joined by a seven-piece band live, Low Mentality) reissued his 1985 album last year and got some deserved attention for it. He played NYC this past December at Baby's All Right to great reviews, and tonight he makes his return. If you're at all thinking about going, you should.

Ex-Cult, Foster Care, VBA, Call Of The Wild @ The Acheron
Memphis ragers Ex-Cult just released their new album, Midnight Passenger, that balances sneering rippers with a few moody extended jams. This is their second of two NYC shows this weekend, and definitely the venue that best matches their sound with great support too.

Free Cake For Every Creature, Frankie Cosmos, Adult Mom, Quarterbacks, Radiator Hospital @ Silent Barn
It's a stacked bill at Silent Barn tonight with mostly twee pop and bedroom folk artists, all of which are worth catching. Admission is $7 or for $10 you can also get into the late show...

Ricky Eat Acid, Foxes In Fiction @ Silent Barn
The late show at Silent Barn tonight (midnight) leans more on the ambient side, and is also $7 for just this one (though that $10 combo sounds like a pretty good deal).

Maximo Park, Jeffrey Lewis & The Jrams, Eternal Summers @ Gramercy Theatre
Maximo Park got their start 10 years ago as part of the same scene that launched Futureheads and Field Music. The band's most recent album moves away from their scrappy, anthemic sound into synthier textures. If you're going tonight, both openers are recommended: Jeffrey Lewis is one of NYC true treasures, and VA trio Eternal Summers are makers of superior indie rock.

Sheer Terror, Agitator, Cop Problem, All Torn Up @ Brooklyn Night Bazaar
NYHC vets Sheer Terror are back this year with their first album since 1995. It's not out 'til June, but from the sound of the first single the band have still got it. Philly's Cop Problem, who blend metal, hardcore and grind, are absolutely worth catching too. Like all Night Bazaar shows, this one's free.

Benoit & Sergio, JDH @ Cameo Gallery
It's a FIXED party at Cameo tonight and for the occasion Ghostly-signed electronic duo Benoit & Sergio are coming up from DC.

It's Memorial Day Weekend! We've got some suggestions for things to do.