Dinosaur Jr at Terminal 5 in 2012 (more by Gretchen Robinette) 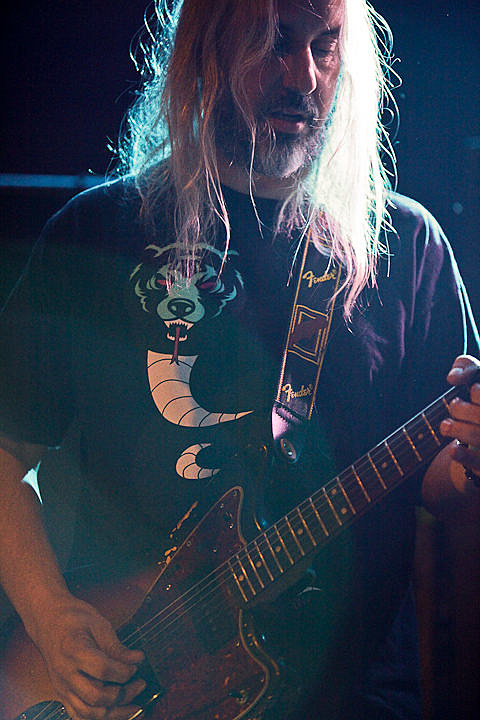 World Party @ City Winery
Karl Wallinger is still working on the new World Party album but in the meantime is back in North America, testing out new songs and playing old favorites too. This is the first of two NYC shows.

The Memories, The Lemons, Street Gnar @ Death by Audio
Like your pop with catchy bubblegum melodies, minimal accompaniment, and even less production value? Tonight's show -- all three bands have affiliations with Burger Records -- fits that bill.

Lower, Survival @ Home Sweet Home
Lower make moody punk not unlike their Denmark neighbors in Iceage who recently became their labelmates, seeing as Lower have signed to Matador for their forthcoming album. This is their first of two NYC shows this week.

Dinosaur Jr., Screaming Females, Creepoid @ MHOW
Unlike many of their reunited '80s/'90s-era indie rock pals, Dinosaur Jr basically picked up where they left off with their 2005 reunion, and with three quality records out since then they haven't looked back. They're also partially responsible for making guitar solos cool in indie rock, which makes openers Screaming Females a perfect fit. And Creepoid, who do justice to '90s slowcore, are worth catching as well.

James Murphy, Eric Duncan @ Output
Maybe it's not the most exciting thing when even your favorite band does a DJ set, but when LCD Soundsystem's James Murphy (who was a DJ before starting LCD) takes to the boards, we at least know we're in for a unique treat that usually includes a handful of obscure disco gems.

Lycaon Pictus, Relations, Forts, Strange Kids @ Pianos
Drawing from a variety of postpunk influences, Relations make dark-hued but catchy, danceable pop, as heard on their debut album, Songbirds. Tonight's the final show of their May residency.

Honduras, Painted Zeros, Huge Pupils, O-Face, ONWE @ Silent Barn
Honduras bring a lot of different influences to the table. A little garage, yes, but there's '80s/'90s British indie too. While it may not be anything you haven't exactly heard before, Honduras write very hooky songs and, as importantly, the bring a real energy to the performance.

Gregory Brothers, The Key of Awesome @ Mercury Lounge
You might know know them by name, but you know their work. The Gregory Brothers are the ones behind Autotune the News, "Double Rainbow" and the "Bed Intruder Song."

Phil Lesh & Friends @ Central Park Rumsey Playfield
We're sure The Grateful Dead are still loathed by many indie rockers out there, but not all. If you're at all interested, Phil & Friends put on great shows and the setlists are loaded with fan favorites.